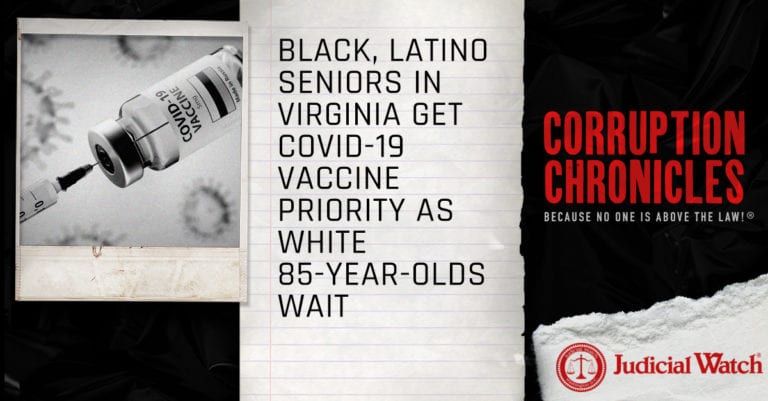 In a move that is outraging senior citizens throughout Virginia, the state is shifting its COVID-19 vaccination distribution to prioritize black and Latino residents even as desperate 85-year-olds interviewed by Judicial Watch struggle to get the shot. Like several other states, Virginia is vaccinating its population in phases, with healthcare personnel and residents of long-term care facilities receiving utmost priority. With that population completed, according to the Virginia Department of Health, the second group includes a peculiar combination of frontline workers, people 65 and over, those with medical conditions, incarcerated criminals and those living in homeless shelters or “migrant labor camps.”

As if it were not bad enough that law-abiding seniors are considered as important to Virginia officials as convicts and illegal immigrants, now comes another slap in the face. In the next few weeks, the state will give preference to black and Latino residents 65 and over while much older white seniors, many in their 80s, cannot secure an appointment to get inoculated. The plan was announced a few days ago by Dr. Danny Avula, who was appointed by Governor Ralph Northam this year to be the state’s vaccine coordinator. A Richmond news report calls it the latest step taken by Virginia to bake equity into its vaccination policies. In recent weeks, the article says, roughly 10,000 vaccines were channeled specifically toward trusted clinics in neighborhoods with older black residents.

The news article cites statistics from a COVID-19 tracking project operated by a liberal monthly magazine. Black Virginians are dying from COVID-19 at 1.2 times the rate of white residents when adjusted for population, according to the project’s figures. Latinos are being infected at more than double the rate of whites. In October, the rate was five times higher than whites. Yet national data has revealed vast disparities between where the virus has devastated communities and where shots are given, the story claims, adding that in Virginia white residents are getting vaccinations at 2.2 times the rate of black residents. “Factors include a history of discriminatory lending practices that pushed these populations into areas with less access to health care, limited internet and a lack of transportation,” the article states. “All of that is on top of navigating a fractured health care system that’s in many ways shut them out.”

The piece makes quite a case for giving minorities preference to get the shot by selectively including stats supporting the argument. For example, the reporter cites “some experts” that have raised concern over age-based vaccine prioritization because it fails to account for lower expectancies among black and Latino communities, though it does concede that 75% of Virginia’s deaths are among those over 70. The story also refers to a Centers for Disease Control (CDC) study that says blacks lost about three years in life expectancy in 2020 while Latinos lost two and whites only eight months. In the state capital of Richmond, most COVID-19 cases, hospitalizations, and deaths are among black and Latino people with life expectancies ranging from 63 to 69 years old. More affluent and white neighborhoods have an average life expectancy between 77 and 83 years old, according to an academic study presented in the story.

A computer-savvy, 85-year-old Virginia man who has tried in vain for weeks to get vaccinated told Judicial Watch the new state order giving minorities preference is “particularly disturbing.” The man and his wife, also in her 80s, do not want to be identified because they are still trying to get the vaccine and fear criticizing the system might hurt their chances. In January the couple, residents of a suburb about 65 miles south of Richmond, signed up on the state website but lost their place after being told that the site was compromised. They have since tried signing up repeatedly with no luck. Many of their elderly friends are in the same discouraging situation, the couple said. “The governor has decided who gets the vaccine based on race/ethnicity,” said another elderly Virginian who cannot get the shot after learning about the new distribution plan in a local media report. “The governor is a disgrace,” said a Virginia native in her mid-80s.