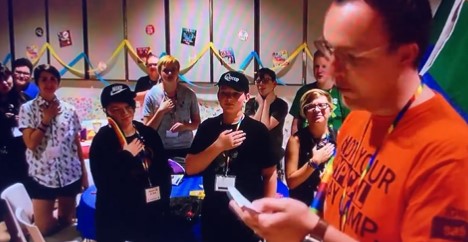 Chasten Buttigieg is “married” to a member of President Joe Biden’s cabinet. Chasten is the “husband” of Transportation Secretary Pete Buttigieg.

And he can be seen in this video leading an LGBTQ youth group in a pledge of allegiance to the rainbow flag. The scene is from a documentary on Pete’s failed presidential run in 2020. It was at an event right here in Iowa, presumably with Iowa youth.

What fresh hell is this pic.twitter.com/jimCCd9Ck7

There is also this clip of Chasten working alongside children while creating “drag-taters” at a campaign event here in Iowa for LGBTQ youth.

Here is the pledge Chasten led, mocking the U.S. Pledge of Allegiance:

I pledge my heart to the rainbow of the not so typical gay camp, to the gay agenda for which it stands. One camp, full of pride, indivisible, with affirmation and equal rights for all.

Chasten visiting Pride Camp with Iowa Safe Schools and reciting the Pride Camp Pledge.
I love this so much. Watch and pledge along at home 😭💖#PeteButtigieg #TeamPete #ChastenButtigieg pic.twitter.com/U8AfUgRfS1

The camp was hosted by GLBT Youth in Iowa Schools Taskforce, which goes by the fictitious name of Iowa Safe Schools. The group is currently under investigation by Iowa Auditor Rob Sand.

Questions swirl from the quiet departure of its former executive director, Nate Monson.

The group itself has been featured many times by The Iowa Standard for its actions:

A TIMELINE: Iowa Safe Schools is dangerous and wicked

COMPLETE SERIES: LGBTQ Indoctrination in Iowa City Schools with assistance from U of I Public Policy Center

VULGARITY WARNING: Check out Annual Governor’s Conference presentation to Iowa students on sex, and what it compares holding hands to

Iowa Safe Schools ‘Governor’s Conference’ has been plenty controversial in the past, Branstad rejected requests to change name