Iowa Gov. Kim Reynolds and the Republican-led legislature have mainly been following fiscal conservative principles of limiting spending and reducing tax rates. Gov. Reynolds even received an “A” grade from Cato Institute’s 2020 Fiscal Policy Report Card on America’s Governors for her fiscal conservatism.

As a result of conservative budgeting practices, Iowa’s fiscal house was not only prepared for the economic emergency caused by the COVID-19 pandemic, but it remains in strong condition. Iowa’s budget has a $305 million surplus, and over $770 million in reserves.

Still, there is room for improvement.

Families across Iowa, whether in good or bad economic times, practice priority-based budgeting. Families must make decisions, often difficult ones, on how best to spend their hard-earned dollars. The same is true for small busines owners across Iowa who must prioritize their spending to not only keep their doors open but meet payroll and provide for themselves.

As households across Iowa prioritize spending, governments should do the same, and even more so given it’s not their money. This results in a sound reason for government to practice priority-based budgeting or zero-based budgeting, whereby legislators take a close look at how every taxpayer dollar is spent.

Gov. Reynolds has proposed an $8.1 billion budget for Fiscal Year 2022. Although this increase from the $7.77 billion FY 2021 budget does not seem like much, this growth is more than the average taxpayer’s ability to pay, as appropriately measured by population growth plus inflation.

This would compound the higher taxes that Iowans are paying to fund their government.

From 2013 to 2020, Iowa’s budget has grown 1.6 times faster than population growth plus inflation. This means that the cost of government is increasing at a faster rate than the average taxpayer’s ability to pay for government. This does not include the high property tax burden placed on taxpayers by local governments or the $9 billion in federal funds that Iowa received in FY 2019. If the budget had matched population growth plus inflation over that period, it would have saved a family of four, on average, $430 per year. This may not appear to be a large savings, but for most families an extra $430 is a vehicle payment or extra money to place in savings. Either way, it is more choices of how to spend their hard-earned dollars. 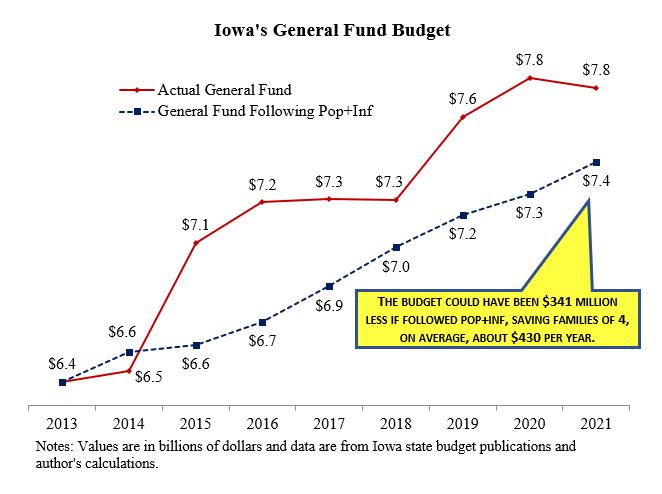 Both Gov. Reynolds and legislative leaders have voiced their concern that Iowa needs a more competitive business tax climate, which the Tax Foundation ranks 40th in the nation. Taxes and spending are two sides of the same coin and Iowa’s high individual and corporate income tax rates will not be reduced if spending is not limited.

Iowa’s budget has a 99 percent spending limitation in law, which means that the legislature must spend at least 1 percent less than projected revenues. Strengthening the spending limit with a constitutional amendment and limiting spending to no more than population growth plus inflation would help keep spending in line with the average taxpayer’s ability to pay. This is an important measure because it accounts for more people paying taxes and higher wages that are highly correlated with inflation.

The Tax Education Foundation’s Conservative Iowa Budget sets the maximum threshold on appropriations based on population growth plus inflation over the last year. Specifically, the maximum threshold on 2022 General Funds is $7.88 billion after an increase of 1.38 percent. Achieving this feat will help keep more money in Iowans’ pockets so they have abundant opportunities to prosper.

Controlling spending is the most difficult thing for a government to achieve because the demands on government continue to grow. Numerous special interests are also applying pressure on the legislature for greater spending, which often crowds out the voice of taxpayers.

History has demonstrated that governments cannot spend and tax their way to prosperity. Iowa only needs to look at our neighbors in Illinois to see the consequences of out-of-control spending.

Policymakers should consider the Conservative Iowa Budget and work to further limit spending. Keeping spending levels low will not only serve the taxpayers’ interests, but it will also make Iowa more economically competitive so that they have more opportunities to achieve their hopes and dreams.

John Hendrickson is policy director at Tax Education Foundation of Iowa and Vance Ginn, Ph.D., is chief economist at the Texas Public Policy Foundation based in Austin, Texas. He is the former chief economist of the White House’s Office of Management and Budget (OMB) during the Trump administration.