When the master of Frederick Douglass (1818–1895) discovered that his wife was teaching his 12-year-old slave to read the Bible, he stopped her. “If he learns to read the Bible it will make him ever unfit to be a slave,” her husband said. In no time “he’ll be running away with himself.”

In his later years, Douglass reflected on that incident as the first antislavery lecture he had ever heard, and it inspired him to do anything he could to read more of the Bible. Eager to know more about the Bible, Douglass recalled, “I have gathered scattered pages from this holy book, from the filthy street gutters of Baltimore, and washed and dried them, that in the moments of my leisure, I might get a word or two of wisdom from them.”

The fact that Bible pages were in gutters while men and women were still enslaved gives some indication that the application of the Bible to all of life was not registering with a lot of Christians.

Douglass had begun to realize what his “master” understood” that “[t]here was power, indeed subversive, revolutionary power, in reading and interpreting the Bible for oneself, and that the institution of slavery in fact depended on controlling biblical literacy — who can read the Bible when and how.”

“Let the reader reflect upon the fact, that, in this Christian country, men and women are hiding from professors of religion, in barns, in the woods and fields, in order to learn to read the Holy Bible. Those dear souls, who came to my Sabbath school, came not because it was popular or reputable to attend such a place, for they came under the liability of having forty stripes laid on their naked backs. Every moment they spend in my school, they were under this terrible liability; and, in this respect, I was sharer with them. Their minds had been cramped and starved by their cruel masters; the light of education had been completely excluded; and their hard earnings had been taken to educate their master’s children. I felt a delight in circumventing the tyrants, and in blessing the victims of their curses.” (My Bondage and My Freedom (1855), 268.)

This is the way Christians read and understood the Bible. Its message was revolutionary. But something happened along the way. Many of today’s fundamentalist Christians have been taught (1) the Bible is about personal salvation not cultural application, (2) its benefits take place after you die, (3) it’s a “spiritual” message that has little to do with this present physical world where Satan is god (2 Cor. 4:4), and (4) Jesus is always coming back soon so there is no reason to rearrange the deck chairs on a sinking ship.

On the other hand, the Civil Rights Movement arose from within the church. It was led by the Rev. Martin Luther King, Jr. Unlike so much of today’s fundamentalism, Blacks were taught that (1) the Bible is personal and cultural, (2) there are benefits in the here and now, (3) its message affects the material, and (4) there is not a heavy emphasis on the end times since they knew what great tribulation was and there was no rapture to rescue them.

Then something happened. Blacks turned to the State — civil government — beyond the call for equal rights. Many gradually succumbed to a secularized “social gospel.” Almost every prominent black leader today has promoted that government is the supplier of all their needs, and it has made them slaves to the State. 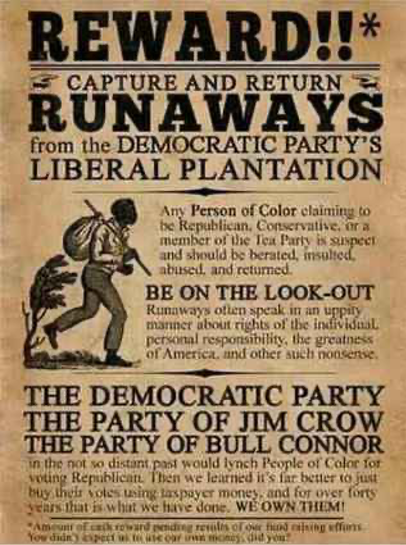 The Good Samaritans are politicians who do “good” with other people’s money. Caring for the poor is now the domain of civil government. They’ve traded one plantation for the “liberal plantation” run by the Democrat Party. Former sheriff David Clarke makes this important point:

Several black “leaders” (e.g., Jesse Jackson and Al Sharpton) have made their living by promoting black victimhood and white guilt. Jesse Jackson has been shaking down corporations with the scam for decades. Booker T. Washington (1865–1915) warned of such people within the black community in his 1911 book My Larger Education. He described them as “problem profiteers”:

There is another class of coloured people who make a business of keeping the troubles, the wrongs and the hardships of the Negro race before the public. Having learned that they are able to make a living out of their troubles, they have grown into the settled habit of advertising their wrongs — partly because they want sympathy and partly because it pays. Some of these people do not want the Negro to lose his grievances, because they do not want to lose their jobs.” (118)

What happens when a black person tells the truth about the new plantation system? He or she is labeled an “Uncle Tom” or an “Aunt Jemima.”

Walker is what [white people] think of [black people], and they think we’re big, ignorant, and easily manipulated. They think we’re shady or criminal. They think we’re tools to be used. The Walker campaign exists as a political minstrel show: a splashy rendition of what white Republicans think Black people look and sound like.

The Democrat Party has been using Black people for decades. Mystal is describing his own political party. In fact, Mystal is the one who constantly uses black people as victims to empower a political party that has kept black people under its thumb, buying them off with programs that keep them dependent on the government.

Utilizing audio, video, and printed material, Worldview 101 will equip the student with the tools necessary to ‘think God’s thoughts’ about the world and the created order. It will reveal and re-direct the humanistic thought patterns that exist in each of us. The Enlightenment promised freedom, but brought slavery to man’s ideas instead. Worldview 101 points the way forward to true freedom of thought in Christ.