Home Opinion DEMAR: Should We Take the Law into Our Own Hands?

Some Christians are asking when is it right to fight against the existing civil power structure. Consider the following:

The concerning poll also discovered that 55% of Republicans supported the possible use of force to preserve the “traditional American way of life,” compared to 15% of Democrats.[1]

Who’s ultimately at fault? Joseph de Maistre (1753–1821) declared, Toute nation a le gouvernement qu’elle mérite. “Every nation gets the government it deserves.” Thomas Jefferson said something similar: “The government you elect is the government you deserve.” We have an intrusive government because the majority of people voted for it in some way. H.L. Mencken might have the best take on the classic phrase: “People deserve the government they get, and they deserve to get it good and hard.” And that’s what’s happening.

In Erwin Lutzer’s book, The Church in Babylon, he states that there are three options for how Christians can choose to live in a pagan, anti-Christian culture.[2] They are:

I will add that many Christians believe there is a fourth option: wait to be raptured out of secular culture. There aren’t enough Christians engaging to change the culture. They are being told it is wrong to waste time on such an endeavor as we saw in a previous article.

In a dispute among the disciples as to who would be the greatest, Jesus said the following: “‘The kings of the Gentiles lord it over them, and those in authority over them call themselves benefactors [Gr. euergetes]’” (Luke 22:25). King Saul was chosen by the people even though the people were told his supposed “good works” would enslave them (1 Sam. 8). Those who called for Jesus’ execution cried out, “We have no king but Caesar” (John 19:15). It would be a military representative of a later Caesar who marched on their capital and destroyed the temple. Josephus claims that 1.1 million people were killed during the siege and nearly 100,000 were enslaved. Be careful who you decide to be your benefactor.

Civil rulers often gain power as the people put their trust in the State to benefit them in some way. For civil governments to benefit the people, some freedoms and property must be lost since the civil magistrate does not have any capital or property of its own. That’s why in biblical terms, the civil magistrate is described as a “minister” of justice (Rom. 13:4), not a minister of love and provision.

Right here is the sore spot… In any successful attack on freedom the state can only be an accomplice. The chief culprit is the citizen who forgets his duty, wastes away his strength in the sleep of sin and sensual pleasure, and so loses the power of his own initiative.[3] 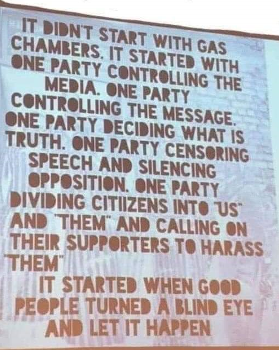 The two-kingdom approach to Christian social theory was used to great advantage by Adolf Hitler. He knew that many Christians believed, like the secularists of our day, that the particulars of their religious worldview only applied to the spiritual realm. Dr. Gary North makes this point:

Whenever men deny God’s absolute sovereignty, they also deny His right to place economic and judicial limits on those institutions that represent Him judicially. This leads inevitably to an attempt by men to transfer final sovereignty in history: from God to some human agency, usually the State. The State then seeks to place boundaries around God’s revealed Word, the Bible.

Civil government operated in the secular realm where natural revelation was the standard. “A Majority within the state church (known as the ‘German Christians’) unwittingly or otherwise embraced the new national religion, founded not on the Word of God but on the divine will allegedly embedded in the natural order. Emerging from this fatal exchange came a semi‑Christian natural religion (some would say a new paganism) in which the church became a servile instrument of Nazi policy….”[4]

Hitler knew there was a lot he could get away with because a majority of Christians did not believe that it was permissible to bring the Bible to bear in realms they considered to be governed by a different set of moral principles extracted from the natural realm. Richard V. Pierard comments:

In the nineteenth century … German Lutherans made a strong bifurcation [i.e., separation] between the realm of public and private concerns…. Religion was the domain of the inner personal life, while the institutional and external, the public, so to speak, belonged to the worldly power. Redemption was exclusively the province of the church, while the law, determinative for external conduct of human affairs, was solely the province of the state. Religion was a private matter that concerned itself with the personal and moral development of the individual. The external order — nature, scientific knowledge, statecraft — operated on the basis of its own internal logic and discernable laws.[5]

For decades before the rise of Hitler, Christians were often subjected to arguments like the following from pastors and theologians based on the two-kingdom-never-the-twain-shall-meet ideology:

· “The Gospel has absolutely nothing to do with outward existence but only with eternal life, not with external orders and institutions which could come in conflict with the secular orders but only with the heart and its relationship with God.”[6]

· Once the Christian understands the moral significance of the state, Wilhelm Hermann declared in 1913, “he will consider obedience to the government to be the highest vocation within the state. For the authority of the state on the whole, resting as it does upon authority of the government, is more important than the elimination of any shortcomings which it might have…. For the person who is inwardly free, it is more important the state preserve its historical continuity than that he obtain justice for himself.”[8]

While many Germans might have been opposed to Nazi policies at a personal level, they had been conditioned to believe — because they were Christians living in two kingdoms operating with two sets of standards — that they could not do anything about these rapidly implemented policies at a political level. Much of their thinking was shaped by a misreading of Martin Luther and the misapplication of Romans 13 and Matthew 22:20. As with all authority, there are limits, including limits on civil government. We know this only from the Bible. Reason and Natural Law do not tell us this. It might also help to realize that we do not live under Caesar

Our civil rulers took an oath to uphold the Constitution as the “supreme law of the land.” This is one of the major flaws of the Constitution. As the Supreme Law, there is no greater law specified in the Constitution than “We the people.” Even so, the Constitution recognizes its limits and the right of the people to (1) express their grievances, (2) vote corrupt and oath-breaking rulers out of office, and (3) change existing laws through an amendment process. But it remains: By what ultimate standard?