Home National Fifteen states yet to take any action when it comes to defunding... 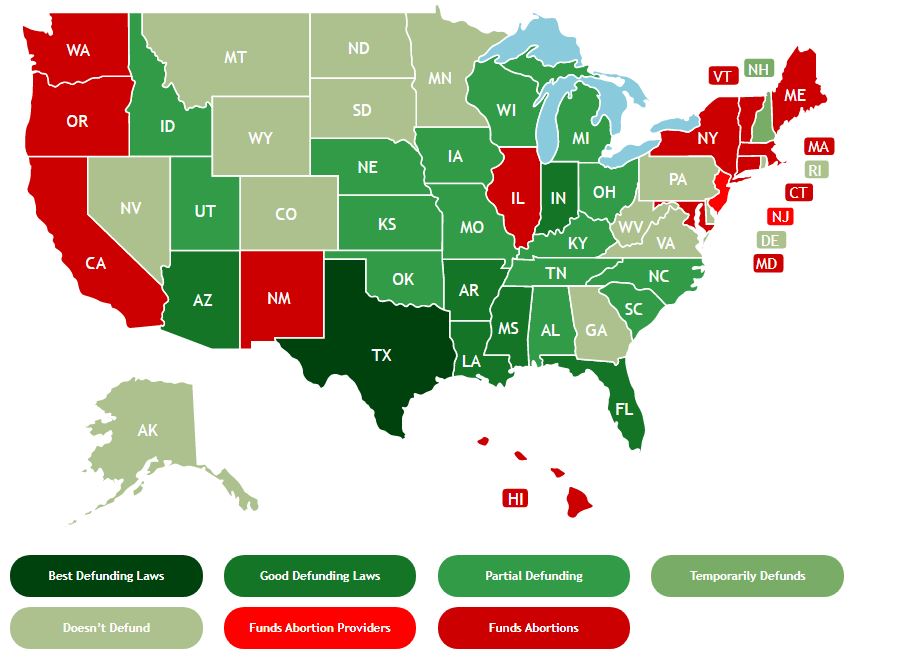 Conservatives across the country have worked to defund Planned Parenthood the last few years after the release of undercover videos that exposed the abortion industry’s disregard for unborn babies.

Yet much of the nation is yet to deal with this. Here is a map from Family Research Council that tracks state funding of the abortion industry through Medicaid, Title X family planning funds and state appropriations.

Iowa has “partially defunded” abortion providers, according to the FRC’s map. Iowa defunded abortions in Medicaid and providers in state appropriations. But the Hawkeye State could score higher.

According to FRC, in 2019, Planned Parenthood received $616.8 million in government funds. Twenty-three states, including Iowa, have defunded or attempted to defund the abortion industry in Medicaid, Title X and/or state appropriations.

From the FRC press release:

As early as 1976, Congressman Henry Hyde (R-Ill.) lead the effort to ban federal funding for abortions in Medicaid, one of the largest government health care programs. Despite the federal Hyde Amendment and ongoing congressional and state efforts to restrict taxpayer dollars from flowing to the abortion industry, the abortion industry receives hundreds of millions of taxpayer dollars every year.

Quena González, Director of State and Local Affairs at Family Research Council, said: “For too long, Planned Parenthood–America’s largest abortion company–has taken millions of dollars every year in taxpayer money. Most of that money flows through the states, giving governors and state legislators tremendous opportunities to defund the abortion industry. FRC’s map highlights state actions to restrict or stop that flow. Since 1976 the federal Hyde Amendment has recognized the principle that taxpayers should not underwrite abortions or the abortion industry. It’s time for Congress and the states to finish Congressman Hyde’s work. This map shows voters where states have or have not acted to turn off the main funding streams the abortion industry uses to siphon off taxpayer dollars.”

Connor Semelsberger, Legislative Assistant for Pro-life Issues at Family Research Council, remarked: “With renewed efforts to repeal the federal Hyde Amendment which bans federal funding for elective abortions, and the push in some states to use Medicaid funds to pay for abortions, it is vitally important to pass laws protecting taxpayers from subsidizing abortion. Now more than ever states must do what they can to separate taxpayer funds from the abortion industry. Abortion is not healthcare and should not be funded as such.”