President Joe Biden, without authorization from Congress, announced he plans to transfer roughly $500 billion worth of student loan debt from the borrowers who took out the loans to hardworking taxpayers across the country. Other presidents, Republicans and Democrats, have attempted to overstep their authority, and we have never been shy about criticizing them. But in our time in the Senate, we have never seen a president attempt to spend up to a trillion dollars with the stroke of a pen.

Yet Biden claims he has this authority under the HEROES Act, a 2003 law to help those serving their country in Iraq and Afghanistan. This post-9/11 bill gave the secretary of education the power to grant flexibility to service members with loans in times of war or national emergency. Now, the White House argues that this targeted law, which was clearly intended to help a select group of service members, gives Biden the ability to transfer debt from tens of millions of civilian borrowers to taxpayers as a result of the COVID-19 “national emergency.”

In our system of checks and balances, this major decision regarding loan forgiveness must be made through the legislative process, not the stroke of a pen at the White House. It’s often said that Congress doesn’t hide elephants in mouse holes. Estimates of the cost of this program range from $500 billion to $1 trillion. For days, the White House refused to release an estimate, claiming they didn’t even know how much this would cost taxpayers. Numbers that large can be hard to put in context, but that is the equivalent of six to 13 times the entire discretionary budget Congress appropriated for the Department of Education earlier this year.

The bulk of that Education Department budget is aimed at those who need help most: low-income families. This debt transfer does the opposite. A college education is an investment, and students who took out loans to pay for their educations typically make their investment back manyfold. For an average loan of $30,000, a bachelor’s degree is worth about $2.8 million over the course of a lifetime.

Nothing is getting “canceled.” These dollars have already gone out the door to pay for college educations; now, it’s just a matter of who will pay those dollars back. Typically, that responsibility is up to the borrower. If Biden’s action is allowed to proceed, it will instead be all taxpayers, two-thirds of whom don’t have a bachelor’s degree, who will foot the bill for other people’s debt.

Taxpayers will pay for this action, both by paying down debt and through increased inflation. Biden’s debt transfer will raise expectations of debt forgiveness, encouraging borrowers to take out more loans and giving colleges the green light to raise tuition even more. All of this is inflationary.

Instead, if we want to be serious about reducing the cost of college rather than moving debt around after the fact, we need to make sure that students know upfront how much they are actually likely to pay. That’s why Republicans have introduced a trio of bipartisan bills to ensure that students can easily see estimates of the total cost of their degree, what scholarships they will receive, and what their expected income will look like after they graduate.

Biden’s student loan debt transfer is an unprecedented abuse of executive authority, an insult to hardworking people who paid off their debt or chose not to take it on at all, and a ticking time bomb that will make the economic hardships many are already experiencing that much worse. All of this is avoidable, and it’s yet another example of how the Biden administration is ignoring the needs of working class Americans. 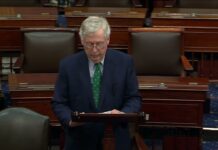