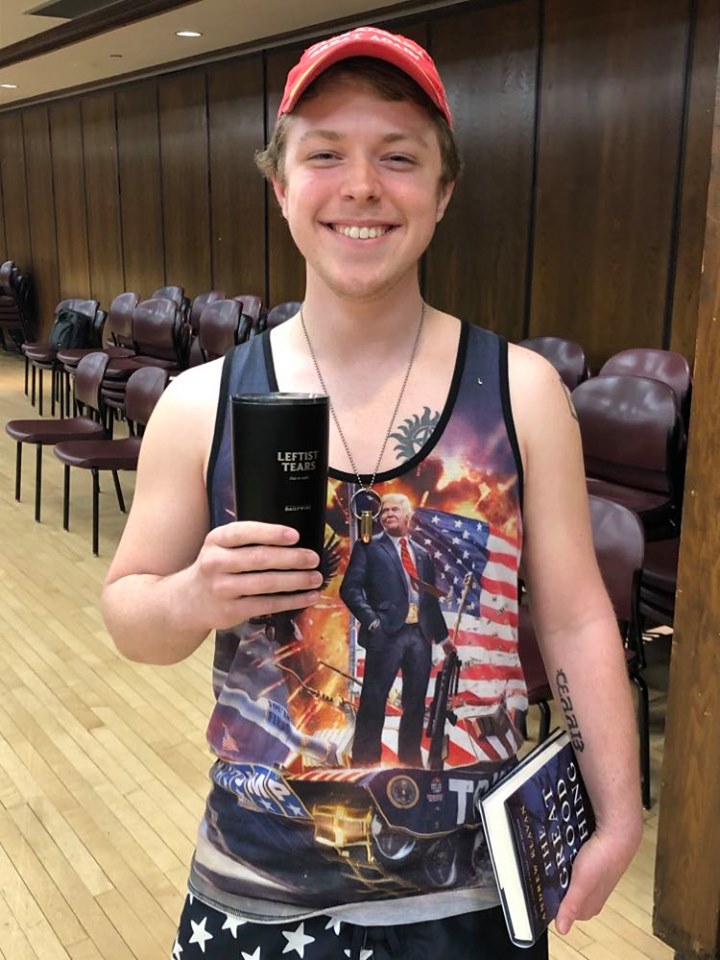 Vande Vorde said when she came to Iowa State from Aurora, Iowa, a small town of 185 people according to the 2010 census, she was “nothing” when it came to politics.

“I was straight in the middle,” she said. “I really didn’t follow politics at all, honestly.”

Tyler, a student from LeMars, introduced Vande Vorde to the political world and to Klavan’s podcast.

“I heard about The Daily Wire through (Tyler),” Vande Vorde said. “He was like a big listener and he kind of changed my views on things because I don’t think I was quite all the way to the right until I met him. He really told me why things were the way they were. He just laid down a base and he kind of did what Andrew Klavan told us tonight and it really opened my eyes to new ideas. I think that’s why I was so interested in coming because he brought so many ideas to the floor, and I knew that he wasn’t as outspoken as Ben Shapiro, so he’s a lot more soft-spoken. And I think that really appeals to a lot more people.”

Tyler was starstruck after the event.

“I absolutely loved it,” he said. “But then again, I don’t think Andrew Klavan has done something I don’t love.”

The highlight of his night was giving Klavan a hug.

As for Klavan’s presentation, Tyler said it provided a new perspective.

“Just with him saying that, even if you’re not a Christian, you act like a Christian if you’re from this area,” Tyler said. “I just never thought of it in that way. And when he pointed it out, it just seems so obvious.”

Vande Vorde said events like this don’t happen near enough.

“It mainly appeals to the Left side more than the Right side sometimes,” she said of these sorts of events. “So when you see someone conservative come, then it’s just kind of eye-opening that the University is open to this. So, I think that’s really interesting that we were able to actually have him come because you don’t really see that around the country.”

Both said they thought there could be more vocal resistance, but there really wasn’t.

“I had hoped that it would be as peaceful as it was, but being realistic, I didn’t think there was, so I’m really pleasantly surprised that there was no chanting and cussing that kind of stuff,” Tyler said.

Vande Vorde thought there would be more opposition too.

“There was actually a lot more support than there was negative,” she said.

Seeing there are other conservative college students out there helps too.

“That is a great feeling honestly because you see all these people turn up and then they have such positive attitudes towards a conservative and then you realize you’re not alone,” Vande Vorde said. “And, most of the time, conservatives don’t really speak up as much as liberals. So it’s nice to just know that there are other people there that you can talk to.”

If you’re curious, abortion was a big issue that changed Vande Vorde.

“The first time I met (Tyler), he was very pro-life and I was set in the middle,” Vande Vorde said. “And I was like, ‘you know what, whatever they choose, it’s fine. I don’t care as long as it doesn’t affect me.’ And then he started kind of changing my ways of thinking and I think that really got me more interested in researching on my own. That really changed me.”

Vande Vorde has come a long way in her brief time at ISU — going from “nothing” in the political world to a young lady sporting a “taxation is theft” cap with a hoodie that warns “don’t tread on me.”

“I’m still in shock because I could give Andrew Klavan a hug,” he said. “He is simultaneously one of my favorite authors and podcasters. The only two authors that are on the same level of him would be Christopher Pallone and J.R.R Tolkien.”