President Donald Trump was the only president who “understood truths” and had the “best interests” of the American people and American dream in mind, according to Academy Award-winning actor Jon Voight, who claimed only Trump could “stop this swamp, this deceit and injustice,” as he called on viewers to “pray” for the former president to “return to the presidency.”

The two-minute clip posted on Sunday and titled “Wake up America,” begins with the Hollywood legend declaring it his “great honor” to say “God bless America.”

He calls for a “healing” for the country from “all the unrighteousness that is taking place” following last week’s midterm elections which saw a much smaller victory for Republicans than the “red wave” that had been predicted.

Warning Americans that the country is “in danger of a Third World War,” Voight insisted the time had come to “look at this lie — this deceit — that continues day after day.”

Read the full article by Joshua Klein with Breitbart here. 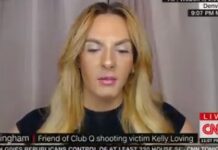 ABOUT US
The Iowa Standard is your Iowa news source. We provide you with the latest breaking news and videos straight from the state of Iowa.
Contact us: [email protected]om
FOLLOW US
MORE STORIES