“Stupid Pet Tricks” was introduced on NBC’s Late Night with David Letterman in the early 1980s. Some of them were cute and clever but many of them were … stupid. For decades there have been Stupid Prophecy Tricks to get Christians to believe that we are living in the last days. While it didn’t start with Hal Lindsey’s The Late Great Planet Earth in 1970, it continued with bar codes being the mark of the beast, red-looking “blood moons” as signs of the end, the discovery of a supposed red heifer for animal sacrifices in the rebuilt temple, and the latest Stupid Prophecy Trick is the claim that beasts from the book of Revelation have been placed in front of the United Nations.

Tracking down this latest Stupid Prophecy Trick has been interesting. Several prophecy sites claim that two Guardian Sculptures represent the beasts of Revelation 13. Here’s one example: 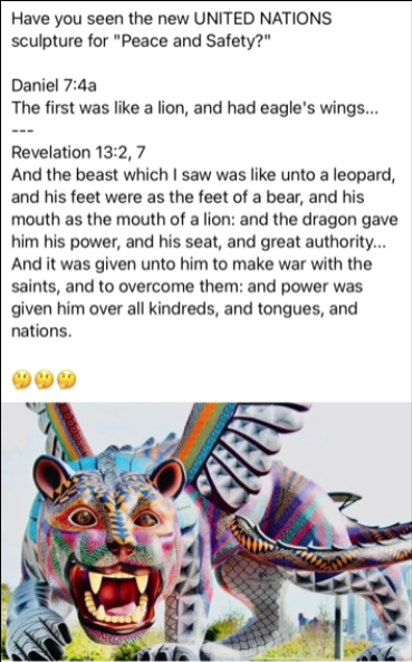 After doing some research I found that two sculptures were designed and created to mark Mexico’s 200th year of independence and were originally displayed at Rockefeller Center:

· Mexico Week: Día de Muertos at Rockefeller Center, which runs from October 22 to November 2, 2021, is a revival of the celebration of Mexican culture that Rockefeller Center originally hosted from 1964 to the mid-1970s…. “Rockefeller Center is offering us a [special] space, a window where the world can see and learn more about the millenary traditions of a country with an immense historical richness,” Jorge Islas, New York’s Consul General of Mexico, said…. The event features a series of large-scale activations to commemorate Day of the Dead, a Mexican holiday that pays respects to relatives and friends who have passed away. “The Day of the Dead is one of the main celebrations that identify us as Mexicans, a celebration in which we remember our loved ones who are no longer with us and commemorate their lives,” Islas explained.

Check out this short video from the display at Rockefeller Center: https://youtu.be/aT0WSjHgu-I

There are two sculptures. Note the description of the sculpture below that was also displayed at Rockefeller Center. The description is important, especially the point about it being a Guardian that does not line up with any description found in the book of Revelation: 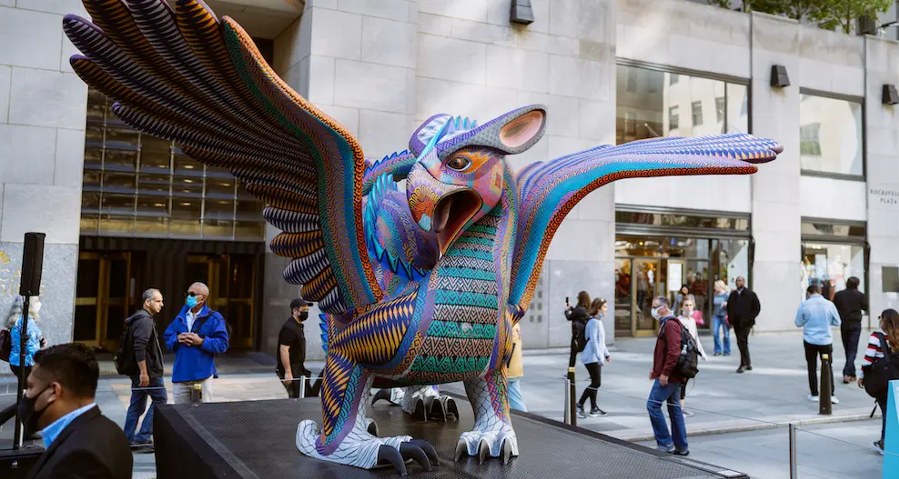 · The first piece has an eagle head, coyote ears, and iguana body. The eagle symbolizes foresight, and the coyote personifies cunning. An iguana can travel by land or water and the eagle by air, “so there are no obstacles or borders these Guardians can’t cross,” according to Angeles.

· “We attribute these animals the necessary qualities of strategy and strength that a guardian must have to defend those who have already arrived or are yet to arrive,” Angeles remarked. “[They are] strong and brave animals capable of transporting and defending their tribe. Both of them are females that care for and love their kin.”

This has nothing to do with Bible prophecy. The people making these claims will turn anything into “evidence” that we are living in the last days. Here’s one example:

Consider these two typical comments in response to the video:

· Brother Chad discusses the recent sculpture placed outside the United Nations Headquarters in New York… And how we continue to see beyond a shadow of a doubt the stage being set for the rise of the future ten kings and antichrist as prophesied in the book of Daniel and the book of Revelation. Jesus is coming soon!

· Prophecy is jumping off the pages!

I wonder what the prophecy pundits have to say about this permanent sculpture based on Isaiah 2:3–4, Micah 4:3, and Joel 3:10 that’s been outside the United Nations since 1959: 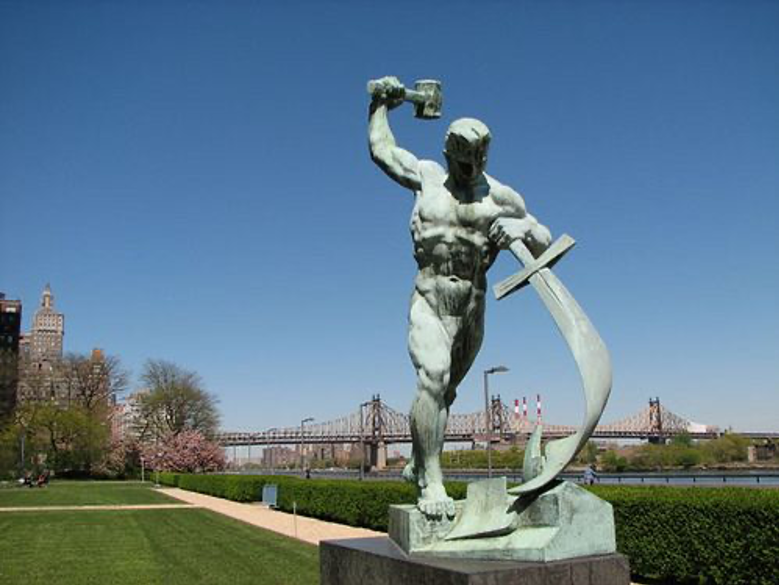 The bronze sculpture “Let Us Beat Swords into Ploughshares,” was created by Soviet sculptor Evgeniy Vuchetich. Standing approximately nine feet tall (excluding the base), the sculpture symbolizes humanity’s desire to put an end to war and convert the means of destruction into creative tools to be used for the benefit of all.

A worthy goal that the United Nations will not be able to bring to pass. The UN will also not be able to unite the world under a religious-political antichrist. How much longer must we endure Christians posting bad prophetic arguments that lead people astray by fixing their hope on an escape hatch called the “rapture of the church” so they don’t have to dirty their hands with kingdom work. William Tyndale (c. 1494–c. 1536) had good reason to believe he was living in the last days because he was hunted down by a corrupt religious establishment:

Eventually, Tyndale was betrayed by Henry Phillips to authorities representing the Holy Roman Empire. He was seized in Antwerp in 1535 and held in the castle of Vilvoorde (Filford) near Brussels. Some suspect that Phillips was hired by Bishop Stokesley to gain Tyndale’s confidence and then betray him. He was tried on a charge of heresy in 1536 and was found guilty and condemned to be burned to death, despite Thomas Cromwell’s intercession on his behalf. Tyndale “was strangled to death while tied at the stake, and then his dead body was burned.”

Tyndale’s translation of the Bible was used for subsequent English translations, including the Great Bible and the Bishops’ Bible, authorized by the Church of England. In 1611 after seven years of work, the 47 scholars who produced the King James Version drew significantly from Tyndale’s original work and other translations that descended from his.

Go and do likewise with whatever gifts and talents God has given you. Stop focusing on some never-ending claim that the end is near and get to work!

Wars and Rumors of Wars

Skeptics read the Olivet Discourse in the right way, but come to the wrong conclusion. Christian futurists read it the wrong way and come to a different wrong conclusion. Jesus predicted that He would return within the time period of that generation alone. Unfortunately, too many Christians are giving the wrong answer when skeptics claim Jesus was mistaken. Everything Jesus said would happen before that generation passed away did happen.

Seduced by popular ‘end-times’ craze, modern Christians are driven not to action, but to radical inactivity, ineffectiveness, and lethargy while waiting for the easy-out ‘end.’ In this authoritative book, Gary DeMar clears the haze of prophecy fever, shedding light on the most difficult and studied passages in the Bible, including Daniel 7:13-14; 9:24-27; Matt. 16:27-28; 24-25; Thess. 2; 2 Peter 3:3-13, and clearly explaining a host of other controversial topics.