Orange City was the site of a third straight OC Pride. OC Pride started in 2017 and has largely gone unchallenged by Orange City officials.

Then, in 2018, OC Pride turned things up a notch. Drag queens were brought in to read and dance with children. Those drag queens then dressed and danced like strippers. They were given dollar bills for their efforts. Video showed one attendee handing a drag queen a dollar and then rubbing his face in the drag queen’s chest.

All of it is very shocking for Orange City, the Christian conservative town. Orange City is the county seat for Sioux County, a place that gave President Donald Trump more than 82 percent of the vote in 2016.

While Rep. Skyler Wheeler (R-Orange City) has been a vocal critic, city councilmen and the mayor have remained silent. The group put out a broad statement after the 2018 event stating everyone should work together for the “greater good.”

In fact, the silence from city leaders has led to challenges in the 2019 election for city council positions as well as mayor.

Things ticked up a notch, however, last week prior to OC Pride 2019. According to court documents, David Klennert and OC Pride filed for an emergency injunction against the city of Orange City.

Klennert entered into a rental agreement on Oct. 19, 2018 for use of the Prairie Winds Event Center, which is owned by the city of Orange City. The agreement was for the purposes of the 2019 OC Pride Festival Headliner Show, which is a drag show.

Though the policy was passed in February and OC Pride had a rental agreement for months, the city did not notify OC Pride of the new conduct policy until Oct. 17 — one day before OC Pride 2019 was slated to start.

The city sent OC Pride a letter on Oct. 17 that said, “last year, during the 2018 Pride Festival, a similar show was held. The City has determined that the conduct that the Headliner Show last year violates the Conduct Policy. From review of the advertising for the upcoming show, it appears that the conduct of this year’s Headliner Show will be similar, if not identical to last year’s show.”

Advertisements for the show encouraged people to bring dollar bills.

The letter from the city demanded assurances from OC Pride to be able to hold its event on Oct. 19 at the event center. The letter stated that “if OC Pride 2019 will not provide assurances that the above-mentioned conduct will not occur, please be advised that the City reserves its right to revoke your use of the Event Center on Saturday evening as provided for in the Conduct Policy.”

OC Pride maintained in its petition for an emergency injunction that the city was attempting to restrict speech, expression and actions of 2019 OC Pride in violation of the Public Forum Doctrine as articulated in Perry Education Association v. Perry Local Educators’ Association.

OC Pride alleged some of the statutes in the policy have been found unconstitutional by the United States District Court for the Southern District of Iowa. They specified concerns with the disorderly conduct statute.

The conduct policy prohibited various activity, including “wearing obscene or inappropriate clothing,” “mooning or exposing private body parts,” “lewd movements or movements that simulate a sex act,” “throwing, tossing or discharging any object or liquid substance,” as well as violation of local, state or federal laws and statutes.

OC Pride said it did not have enough time to secure a different location. It also said there was not enough time to give notice of the petition to the city of Orange City or to hold a hearing on said injunction.

OC Pride requested the Court to enter an injunction that would’ve prohibited the City of Orange City from restricting access or engaging in conduct that restricts access to the Prairie Winds Event Center by OC Pride 2019, its organizers, performers, observers, the general public, guests and associates on Oct. 19, 2019 from 7 a.m. until Oct. 20, 2019 at midnight.

In other court documents, Klennert stated he was surprised by the demand to provide written assurances by the City because he also serves on the Orange City Arts board, an organization that has held events at the same facility, yet never has been required to provide any written assurances.

“I am also unaware of any other group that has been targeted by the city in similar fashion,” the document states. “Based on my conversations with the city officials, I believe that the City’s Conduct Policy was implemented in direct response to the 2018 festival, and with the sole purpose on limiting the free speech, activities and expression of the LGTBQ+ community going forward.”

The judge denied OC Pride’s request for an emergency injunction.

According to KIWA Radio, OC Pride issued a press release stating the city added five additional stipulations to the conduct policy, including that minors could not be present.

However, video from the event on YouTube shows the city of Orange City changing its mind about allowing minors to be present.

Even minors accompanied by parents were not supposed to be at the event. However, a representative from the city clarified minors would be allowed as long as the other four points of the letter were followed.

“They threw in some extra stipulations that we believe infringe on our First Amendment rights to freedom of expression,” Klennert said.

Klennert announced the city requested no minors could be present.

“Nothing we’re doing here is illegal,” Klennert said. “We would like some clarification from Mark, who is upstairs right now…Are minors allowed at this event this evening?”

Mark responded, “As long you guys stay in compliance with the policy, the minors will be fine.”

The five bullet points in the letter from the city read:

“So, you are saying that we have to abide by those five points and that minors are not allowed? Is that a fair statement? Can you answer yes or no to that Mark,” Klennert asked.

“Only the first four? So the rules of that letter have now changed since we were presented that letter,” Klennert asked.

“Just the first four,” Mark said again after some silence.

“I do not believe that the city is acting in good faith on that statement,” Klennert said.

Minors were asked to create a single-file line, go to the lobby and individually walk up to Mark and ask him if they are allowed to be here this evening.

We’re not sure what happened after that, as that is where the video ends. However, other videos posted to social media of the event show at least one minor present during this show. OC Pride said the show proceeded as planned and no person performing or attending was found to be in violation.

The city put forth a statement saying Orange City maintains the rights of all citizens to express themselves lawfully. The city said supporters and participants of OC Pride may gather to express their viewpoint.

“All lawful expressions are allowed and upheld by the City,” according to the city’s statement. “However, this right is not absolute. Expressions which involve exposure of sexually suggestive material to minors in violation of State law will not be tolerated.”

However, while the city was in attendance, it did not seemingly enforce its policies or city code very well — if at all.

According to Orange City code, it is illegal to expose one’s buttocks.

However, this is the attire of one of the performers. This is footage of the “family show” the drag queens hosted prior to the headliner show. The city offered no objection to the children’s show.

This is footage that was publicly posted on social media of the headliner show.

Here is a photo of some of the drag queens that was publicly posted to social media. 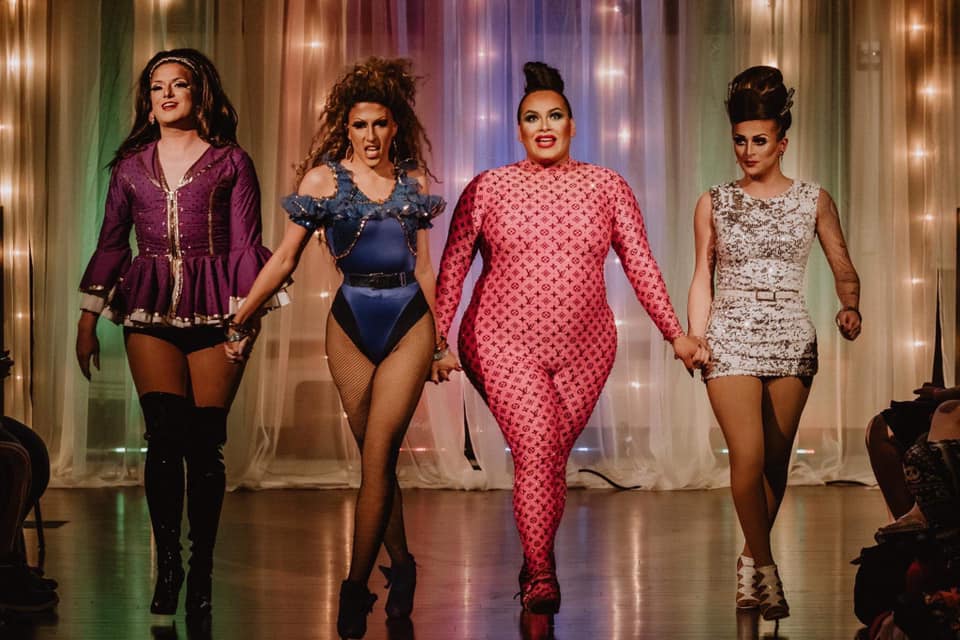