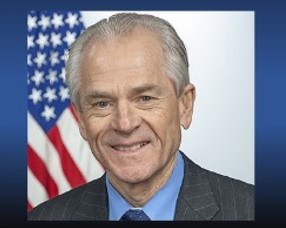 Join us in a conversation with Peter Navarro,

Assistant to the President, Director of Trade and Manufacturing Policy, and National Defense Production Act Policy Coordinator under President Trump.

Peter Navarro is one of only three White House officials by President Trump’s side from the 2016 campaign to the end of the president’s first term.

In July, he bucked political correctness by publishing The Navarro Report, an extensive examination of fraud in the 2020 election.

“Trump not only won, he won in a freakin’ landslide,” he told an interviewer.

This past week, Dr. Navarro released his latest book.

“In Trump Time” unmasks health czar Anthony Fauci’s deadly actions, provides stunning clarity to the January 6 Capitol riot, lays bare the facts about the 2020 presidential election and its aftermath, and reveals what really happened at a Communist Chinese bioweapons lab in Wuhan.

The evidence revealed in the three volumes of The Navarro Report show why President Trump and many Americans have a good faith belief that the November 3, 2020 presidential election was stolen.

The Report includes substantiation from more than 50 lawsuits and judicial rulings, thousands of affidavits and declarations, testimony in a variety of state venues, published analyses by think tanks and legal centers, videos and photos, public comments, and extensive press coverage.

Peter Navarro is the author of the just-released book “In Trump Time: A Journal of America’s Plague Year.”

Peter Navarro holds a Ph.D. in economics from Harvard University and was a professor emeritus of economics and public policy at the University of California-Irvine for more than 20 years. He served as Assistant to the President and Director of the Office of Trade and Manufacturing Policy at the White House during the Trump Administration.

He produced the three volumes of The Navarro Report in his personal capacity to shed light on potentially illegal activity that may have occurred during the 2020 presidential election.

Turning Point USA founder Charlie Kirk has this to say about Mr. Navarro:

“[Peter is] one of the most important people that served in the Trump administration and was loyal to the President to the very end, which is somewhat of a rarity….He has a new book coming out! ‘In Trump Time’ …. Everyone check it out.”