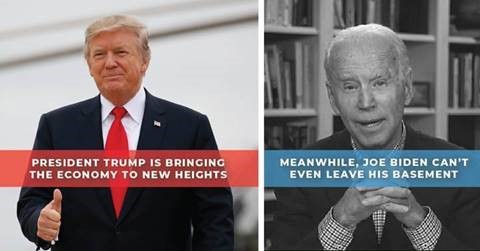 Wall Street Journal said it best: “The media’s grim reapers continue to predict catastrophe from the Covid-19 resurgence, but it’s hard to read Thursday’s labor report as anything but good news.”

As President Trump promised, the Great American Comeback is underway.

The Wall Street Journal also points out that “Liberals are casting the sunnier than expected jobs report as mostly cloudy.” It comes as no surprise that Democrats say – more like hope – that next month’s job report will be worse. After 40 years in Washington, Joe Biden has done nothing to build a stronger economy, create economic prosperity for hardworking Americans, or generate any sort of excitement for his campaign.

On the other hand, President Trump built the greatest economy in the history of the world and he’s doing it again!

Bottom Line: It is sad but not surprising that Democrats and the liberal mediaare disappointed by the astounding economic recovery and Great American Comeback headed by President Trump. At the end of the day, Americans know President Trump is working hard for them while Biden is hiding in his basement and will cast their ballots accordingly.