Iowans For Tax Relief 1
Home Economy Rep. Roy breaks down how Congress ‘royally screwed the country’ with $1.7T...
Share
Facebook
Twitter
Pinterest
WhatsApp
***The Iowa Standard is an independent media voice. We rely on the financial support of our readers to exist. Please consider a one-time sign of support or becoming a monthly supporter at $5, $10/month - whatever you think we're worth! If you’ve ever used the phrase “Fake News” — now YOU can actually DO something about it! You can also support us on PayPal at [email protected] or Venmo at Iowa-Standard-2018 or through the mail at: PO Box 112 Sioux Center, IA 51250

“Today, the United States Senate, the Senate supposedly the ‘upper chamber,’ the House of Lords in the United States, if you will, sent us, or is in the process of sending us after voting for it, a 4,155-page bill unveiled yesterday morning at 1:30am that will cost 1.7 trillion dollars. This bill will increase spending: 118 billion dollars.”

“I could go on and on and on for all of the things that are put in here divvying us up by race, divvying us up by gender ideology, all of those earmarks just flooding out with money we don’t have. But that’s not even the worst of it. That’s not even the actual irresponsibility of this body. That’s just pork, spending that this body is used to doing to the tune of 15, 16 billion dollars. The real problem is that we are funding a whole alphabet soup of federal agencies that are demonstrably not doing their job, but more importantly are demonstrably targeting the American people.”

“What is more important than sitting down here on the floor and highlighting the fraud being perpetrated on the American people right before our eyes? A complete and utter disastrous fraud, endorsed by 18 Republican senators…I hope none of my Republican colleagues in this chamber, but we’ll see. A bill that will fundamentally limit our ability to secure the border, it’s actually in the dang bill. They don’t even pretend anymore, ladies and gentlemen. They don’t even try to hide it. They actually put the text in the bill that says this money cannot be used to secure the border of the United States, it can only be used to process people. That is in the text of this bill. Let me be clear to those 18 United States Senators: that alone, that alone should have been enough to have you vote no on this bill. And yet you voted for it.”

“Mike Lee dared to try to do something about that. Oh, and you should have seen the wailing and gnashing of teeth. ‘What are you going to do? We don’t want to be here until Christmas.’ Why don’t you tell that to George Washington and the boys crossing the Delaware in 1776? Or the boys in Bastogne in 1944? What were they doing on Christmas? Were they trying to fly out of the nation’s capitol in their jets back to their homes, run their warm fireplaces, so they can be with their families after they absolutely just royally screwed the country and their kids and grandkids? Because that’s what they just did. That’s what this body, this House chamber, the people’s house is going to do.” 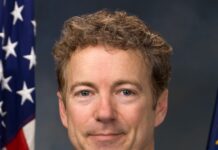 “If Congress doesn’t make a budget, we shouldn’t get paid”: Senators reintroduce bipartisan No Budget No Pay Act