Most people don’t realize it but today’s Leftist politics was birthed and incubated in violence against the system. The violent rhetoric and action of the 1960s and ending with the Kent State shootings in 1970, drove the radicals underground. They were the same radicals but they exchanged their bombs for college degrees, suits, and political ascendency. They became the system they said they despised.

They took pages from the works of Antonio Gramsci (1891–1937) and Saul Alinsky. Gramsci broke with the revolutionary Marxists and their rhetoric. To change the culture, he argued, “would require a ‘long march through the institutions’—the arts, cinema, theater, schools, colleges, seminaries, newspapers, magazines, and the new electronic medium [of the time], radio.” (Patrick J. Buchanan, Death of the West: How Dying Populations and Immigrant Invasions Imperil Our Country and Civilization (New York: St. Martin’s Press/Thomas Dunne Books, 2001), 77.)

In a similar approach, Alinsky gave the following marching orders to his revolutionary followers:

Do one of three things. One, go find a wailing wall and feel sorry for yourselves. Two, go psycho and start bombing — but this will only swing people to the right. Three, learn a lesson. Go home, organize, build power and at the next convention, you be the delegates. (Saul Alinsky, Rules for Radicals, xxiii.)

That’s exactly what they did, but before they became “respectable” political revolutionists, their predecessors softened the system with force and violence.

On the cover of Revolution for the Hell of It, Abbie Hoffman, (Hoffman was found dead in his apartment in April 1989. (“A Flower in a Clenched Fist,” Time [April 24, 1989], 23).) the Yippie spokesman of the 1960s, is pictured with a rifle in his hand leaping for joy. Hoffman envisioned and encouraged today’s sexual revolution and the general disembowelment of morality. Hoffman went further by supplying information that he hoped would lead to the violent overthrow of “the system”:

To enter the twenty-first century, to have revolution in our lifetime, male supremacy must be smashed, . . . A militant Gay Liberation Front has taught us that our stereotypes of masculinity were molded by the same enemies of life that drove us out of Lincoln Park. The words “chick” and “fag” and the deep-rooted attitudes they imply must be purged from the New Nation. Cultural Revolution means a disavowal of the values; all values held by our parents who inhabit and sustain the decaying institutions of a dying Pig Empire. (Free (Abbie Hoffman), Revolution for the Hell of It (New York: Pocket Books, [1968] 1970), 3.)

Revolution for the Hell of It was republished in 2005 and is available on Amazon.

Hoffman’s rhetoric about revolution was just a warm-up. In Steal This Book he gave instructions on how to build stink bombs, smoke bombs, Sterno bombs, aerosol bombs, pipe bombs, and Molotov Cocktails. Hoffman’s updated version of the Molotov Cocktail consisted of a glass bottle filled with a mixture of gasoline and styrofoam, turning the slushy blend into a poor man’s version of napalm. The flaming gasoline-soaked styrofoam was designed to stick to policemen when it exploded. (Abbie Hoffman, Steal This Book (New York: Pirate Editions, 1971), 170–79.) Helpful drawings on how to make incendiary devices are included.

Let’s Blow Up Something!

In Woodstock Nation, Hoffman updates his revolutionary tactics. This time, Random House is the publisher. Next to Random House’s name on the title page, there is an illustration of a man blowing up a building with dynamite. This same illustration appears in Hoffman’s Steal This Book.

The theme of both books is how to blow up the system, literally. Hoffman informs us that “the best material available on military tactics in revolutionary warfare” is available through “the U.S. Government Printing Office, Washington, D.C.”

Another publication that’s probably the most valuable work of its kind available is called Physical Security and has more relevant information than Che Guevara’s Guerilla Warfare. The chapter on Sabotage is extremely precise and accurate with detailed instructions on the making of all sorts of homemade bombs and triggering mechanisms. That information, combined with Army Installations in the Continental United States and a lot of guts, can really get something going? (Abbie Hoffman, Woodstock Nation: A Talk-Rock Album (New York: Random House, 1969), 114.)

Of course, Hoffman never advocates blowing up anything or anyone. “I ain’t saying you should use any of this information, in fact for the records of the FBI, I say right now ‘Don’t blow up your local draft board or other such holy places.’ You wouldn’t want to get the Government Printing Office indicted for conspiracy, would you now?” (Hoffman, Woodstock Nation, 114.) He’s just making the information available, with a wink and a nod. You know, freedom of expression and all of that. Then he reproduces pages from the Department of the Army Field Manual dealing with “Disguised Incendiary Devices,” “Mechanical Delay Devices,” and pipe bombs. (Hoffman, Woodstock Nation, 115–116.) 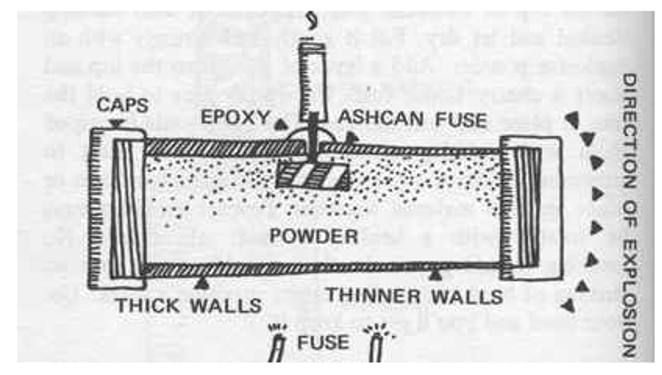 Liberals have short and selective memories. “Righteous violence” was rationalized by the front-line New Left leadership in the 1960s in the same way that it is rationalized by those who want us to “understand the plight of Islamic extremists.“The use of violence was justified, many in the New Left comforted themselves, because theirs was a violence to end all violence, a liberating and righteous violence that would rid the world of a system that deformed and destroyed people. Such glorious ends justified, even ennobled, violent means.” (Richard J. Ellis, The Dark Side of the Left: Illiberal Egalitarianism in America (Lawrence, KS: University Press of Kansas, 1997), 137.)

Organizations like Students for a Democratic Society (SDS) and the Student Nonviolent Coordinating Committee (SNCC) used violent rhetoric almost from their inception in the early 1960s. The late John Lewis (1940–2020), the very liberal long-time Democrat representative from Georgia, boasted when he addressed the March on Washington in August 1963, “We will march through the South, . . . the way Sherman did. We shall pursue our own ‘scorched earth’ policy and burn Jim Crow to the ground—nonviolently. We shall crack the South into a thousand pieces and put them back together in the image of democracy.” (John Lewis, “A Serious Revolution,” in Massimo Teodori, ed., The New Left: A Documentary History (Indianapolis, IN: Bobbs-Merrill, 1969), 102.)