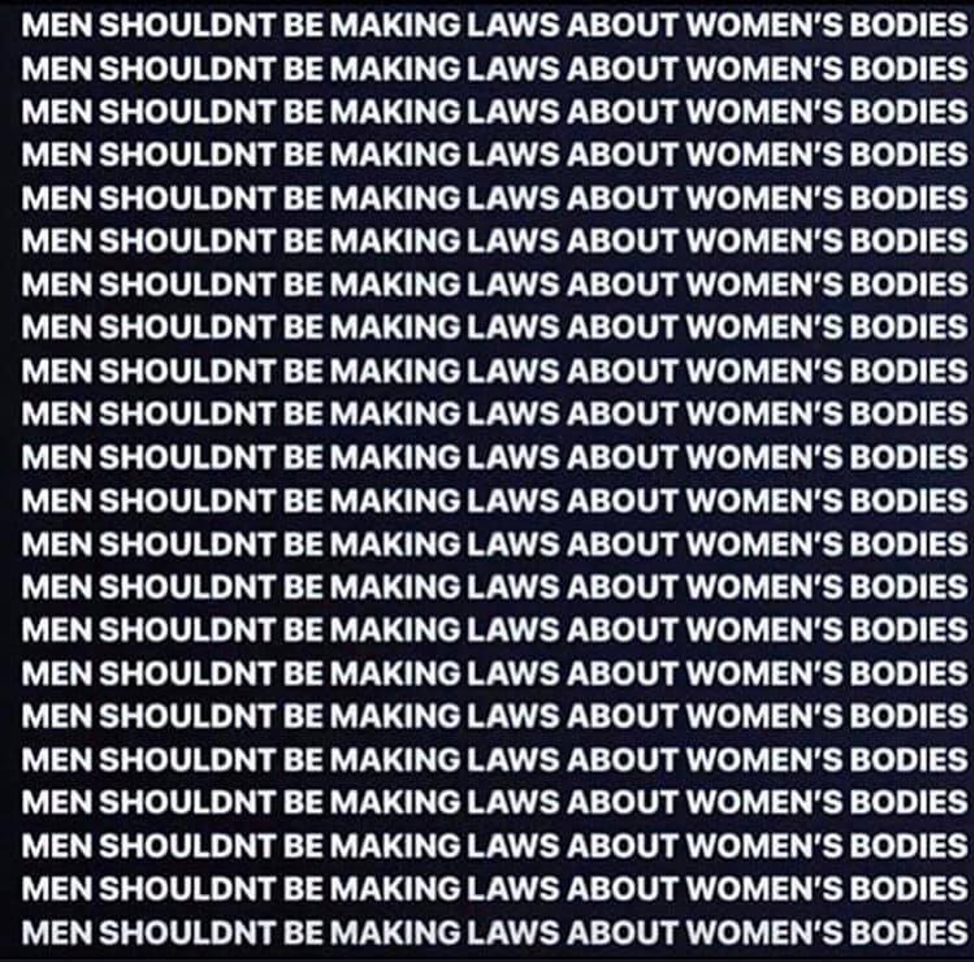 Of course, it’s about abortion. Three objections should immediately jump out at you. First, men aren’t the only sex that opposes abortion. Women in great numbers also oppose abortion. Let’s not forget that babies take a woman and a man. Yes, there are only two sexes, and men, even if they claim they are women cannot give birth.

Second, abortion is not about dictating what women can and cannot do with their bodies. Men are not trying to pass laws against women for the length of their hair or its color, the shade of nail polish they use, or various types of plastic surgery. These take place on or in a woman’s body. In fact, there are no laws that demand that a woman cannot mutilate her body because she believes she is a man or some such made-up gender identity.

Then there’s super anti-Trump David Frum who writes for The Atlantic. Not only did Frum attack Trump again but he attacked and denigrated Trump voters by describing them as coming from counties with a “lot of obesity and drug abuse” who he claims voted strongly for Trump. I suspect that drug users, if they vote, mostly vote for Democrats since the Dems are the ones pushing hard for drug legalization. A county may have a lot of obese people, but how do we know they voted for Trump since Democrats vote as well? No county has voted 100% for Trump.

Many of these counties have people on welfare who are often, as a population, obese. They, too, would most likely vote for Democrats if they even vote since voting is hard work. I bet you this obese woman is a Democrat, and if she voted, she voted for Biden.

Then he went on to disparage the elderly:

“The Republican Party is an elderly party, it’s a party of people with chronic health problems. One of the things that was true in 2016, if you found a county where there is a lot of obesity and drug abuse, that’s where you had a lot of Trump votes.”

Wow! I wonder if elderly voters in the Democrat Party know how this anti-Trumper thinks of them. Like Black voters, elderly voters are only any use to Democrats to help them win elections.

Let’s see, Nancy Pelosi is 81 years old. Joe Biden is 78 years old and senile. Dianne Feinstein is 88 years old and failing physically. Maxine Waters is 83. Chuck Schumer and I are the same age and I would be more than willing to take him or Frum on in the ring or the weight room.

Remember Supreme Court Justice Ruth Bader Ginsburg. She hung on until she died at 87 years of age. And the Left turned her into a saint because of her staunch support for killing unborn babies. The 2018 film On the Basis of Sex was a hagiographical portrait of the octagenarian Leftist icon. But the crazy Democrats can’t even let her escape their party’s extremism. The ACLU, mostly and maybe all anti-Trump Democrats, “in the act of celebrating the late Supreme Court Justice Ruth Bader Ginsburg and fighting restrictions on abortion, altered a famous Ginsburg quote to remove the word ‘woman’ and replace female pronouns with the singular ‘they.’” It’s now fashionable for Democrats to be even more irrational. “A university in Pennsylvania told students that ‘action could be taken’ against them if they do not respect their classmates’ preferred pronouns.”

“There is something compensatory, I think, about this cult of physical prowess, it’s people who at some level feel physically weak … there are all these weirdly homoerotic fan images of Trump,” Frum continued. “Trump can’t lift a glass of water, can’t walk down a ramp, hasn’t done meaningful physical exercise ever in his life … The idea that you would make this fetish about him, it says something about your doubts and your needs.”

Frum is supposedly an educated man. His rage-rhetoric is a cover for how policy-weak the Democrat Party is and how incompetent Joe Biden is. The country is falling apart at the seams. We are being invaded at the invitation of the President of the United States. Biden’s approval numbers are plummeting. People are coming out saying they regret voting for Biden. These personal attacks are usually leveled against an opponent when you don’t have anything in your ideological or policy quiver to shoot at the opposition.

Remember the stumbling of Hillary Clinton. Pres. Biden can hardly complete a coherent sentence. His handlers won’t let him take questions. Trump barnstormed across the country giving long speeches without notes or a teleprompter.

Remember the Messiah, Barack Obama? The painting below was painted by New York-based artist Michael D’Antuono and is titled “The Truth” showing Obama with a crown of thorns on his head, in a pose reminiscent of the crucifixion. 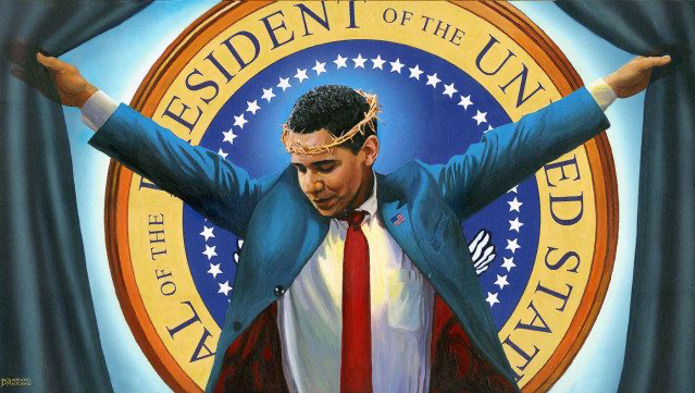 How about this Newsweek cover? 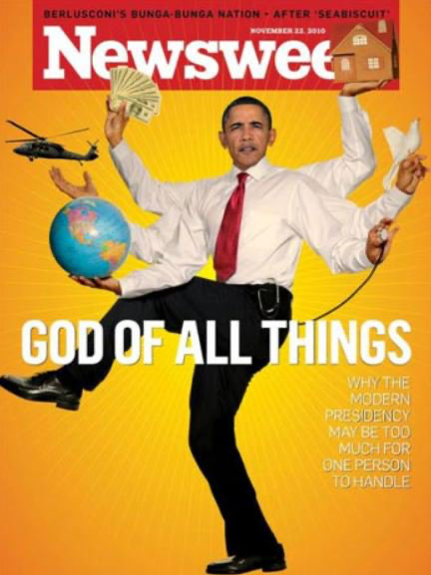 And this also is from Newsweek: 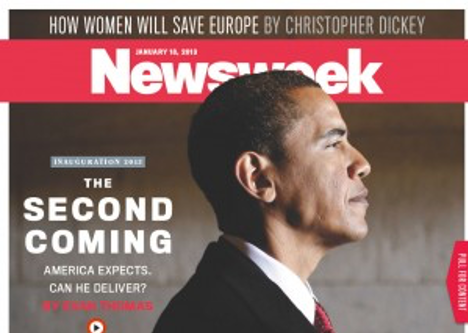 “Conservatives have long joked that the national press corps see Barack Obama as the second coming of Jesus Christ,” writes Brent Baker of Newsbusters. “Today, Newsweek … made it official.”

Frum is involved in a dodge called “projection,” unconsciously, or in his case, consciously, taking unwanted traits in your political party and attributing them to another party. The Democrat Party is the most radical in history, from supporting the killing of unborn babies from conception to birth and beyond (see the Born Alive Act continually voted down by Democrats in the House) to transgender rights so men who claim to be women can beat women to a pulp. “Fallon Fox, the first MMA fighter to come out as transgender, once fractured the skull of her opponent in an MMA fight in 2014.” In September of this year, so-called transgender mixed martial arts fighter Alana [sic] McLaughlin, a biological male, defeated his opponent by a vicious rear-naked chokehold in their bout. Get this, McLaughlin served in the U.S. Army in the Special Forces.

But according to Frum, it’s conservative Christian pro-Trump supporters who are the crazies. There’s no fixing stupid.