***Please do not allow children to read this story. It includes details that are not appropriate. Later in the story there will be images that were presented to young Iowans that you will want to make sure no young Iowan you care about sees and, honestly, you may find disturbing as well.***

The Annual Governor’s Conference on LGBTQ Youth has a history of controversy. Despite the many vulgar, inappropriate activities hosted by GLBT Youth in Iowa Schools Task Force, Gov. Kim Reynolds still allows the group to use her title in the name of its largest event of the year.

Some Republican lawmakers (Congresswoman-elect Ashley Hinson, Rep. Bobby Kaufmann and Sen. Chris Cournoyer) even pal around with the organization that hosts the conference. That group’s fictitious name is “Iowa Safe Schools.” But it is actually “GLBT Youth In Iowa Schools Task Force.”

But that is a story for another day…

This year’s conference included a presentation on “Inclusive Sex Ed and Knowing YOU.”

But the actual presentation given was titled “Safer Sex for LGBTQIA Folx.” It was hosted by Beth Mensing — the manager of education for Planned Parenthood North Central States.

She’s worked with students at all grade levels. She is the manager of education and trains other health educators to make “every classroom a safe, inclusive learning environment, tailor presentations to meet the need of the audience and ensure that accurate information is being shared to empower participants and their bodies.”

We received the following information from an adult attendee of the conference.

Along with Mensing’s video presentation, there was a “safer sex handout” available for students.

The conference, if you’re wondering, is targeted toward middle school, high school and college students.

If you’re wondering, here is a list provided to the students in the next slide:

Now, look what is equal to those activities… closed-mouth kissing, tongue kissing, hugging and holding hands.

Holding freaking hands is listed on the same list as bondage.

Tongue kissing is on the same list group sex.

If it seems crazy, it’s because it is. And remember, GLBT Youth In Iowa Schools Task Force is able to market the event as the Governor’s Conference with zero resistance from Reynolds’ office and has received hundreds of thousands of taxpayer dollars through different grants.

But wait, there’s more. GLBT Youth in Iowa Schools Task Force and Planned Parenthood North Central States were not done corrupting the kids at that point at the Governor’s Conference.

Students are told about STD transmission: 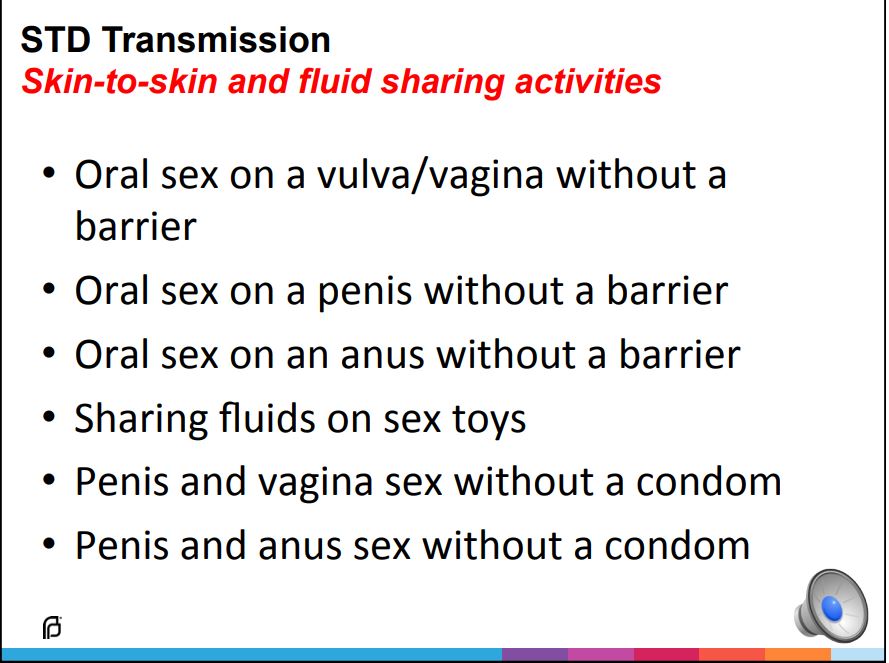 And they’re warned about pregnancy. Which isn’t as simple as boy + girl anymore. 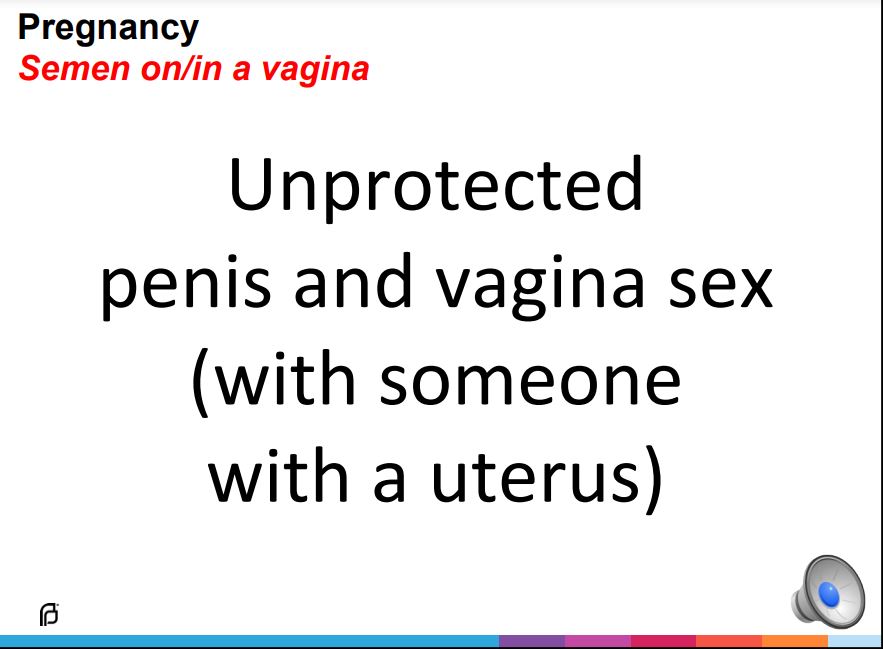 There’s a light-hearted document that lays out the risks associated with each behavior. It’s called the Rainbow of Risks.

This breaks down self-masturbation with no fluid exchange with partner(s); dry humping partner(s) with clothes on; hand to chest or other non-genital touching; using sex toys, feathers, vegetables, stuffed animals or other objects; hand to genitals (hand to sex toy); mouth/tongue to mouth/tongue; mouth to genitals; genital to genital (rubbing); penis to vagina (penetrative); and penis to anus (penetrative).

Take note obviously of the partner(s).

For each activity, there is a column for tests needed, protection and prevention, fluid or skin contact and STD risks. Students are then given a comic-book sort of presentation on correct condom usage.

It appears to be two boys deciding if they’re ready to have sex. And, from the photos, you can see what happens next. They have you covered, too. Here is correct condom usage: 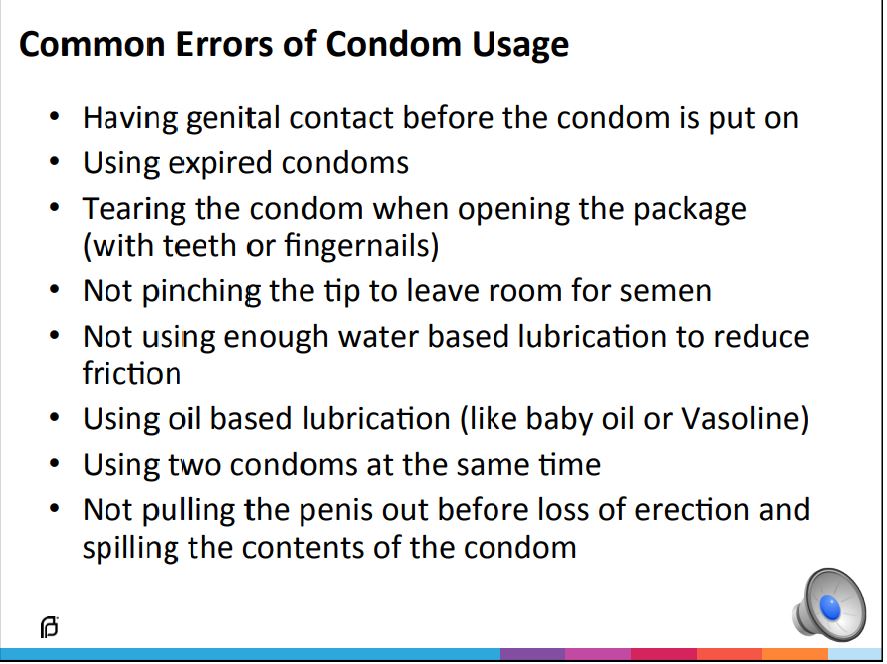 Fast forward to internal condom usage. Now it is women who look to be deciding whether they want to have sex. And if I am counting right, there are three of them. Included in the presentation are four pro-tips: 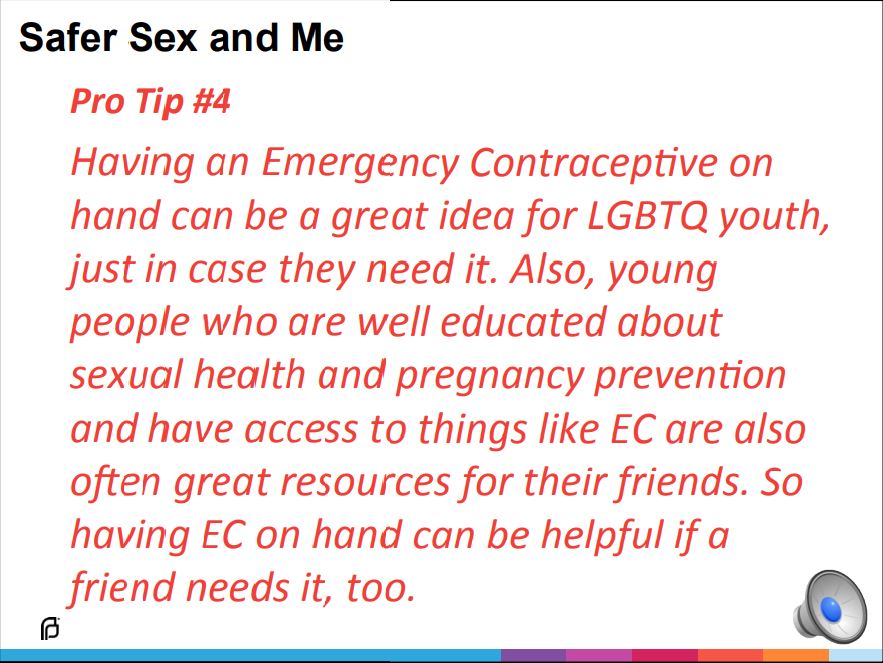 And what Planned Parenthood presentation would be complete without some pregnancy prevention tips: