***UPDATE: Tim Carver, the principal at Urbandale High School, contacted The Iowa Standard after publication. Mr. Carver said he had not been contacted by any student(s) or family members of any student(s) regarding the event referenced in this article. He said the school takes matters like this “very seriously” and will investigate to confirm the validity of the information.

The Iowa Standard reached out to Ms. Smith and Mr. Carver on Dec. 23. This was the first response we received. As of late Saturday night, it appears that Ms. Smith has deleted her Twitter account. However, The Iowa Standard has not heard back from her either regarding our Dec. 23 email.***

An Urbandale High School junior said that his teacher asked him to remove his Blue Line flag from his bedroom wall during a Zoom class.

Students at Urbandale are currently all online.

The junior told The Iowa Standard that the incident originally happened a couple of days prior but happened again on Tuesday.

The student said he has had trouble all year with the teacher because he is a “huge Republican.”

“I don’t try to make it known, but somehow she has figured it out because we butt heads all the time,” he said. “I try to be as nice as I can to her.”

The teacher, Nikki Smith, is an English teacher. The student said he was asked to take his Blue Line flag down because it is “very offensive” and “distracting.”

Here is the interaction, according to the student:

SMITH: “That’s very offensive that you have those up.” (According to the student, she called the flags “distracting.”)

STUDENT: “Oh, well, why are they distracting?”

STUDENT: “What’s offensive to other people?”

STUDENT: “Because I support the police?”

STUDENT: “Sorry you feel that way. Nobody has come to me about it, especially in all my classes.”

The student said the exchange “blew him away.”

“One of my friends called me later after school had ended,” he said. “This person that called me, I will admit it, has completely different views than I do. But they said that was not right of her to do.”

His friend told him that being in his own house, he should be able to have what he wants to support in his own room.

The student said he left his flags up. In addition to his Blue Line flag is an American flag.

“I’m not going to take them down,” he said. “Sorry, they’re in my room. I left them up and just did my thing.”

He said he turned off his video since Smith seemed to be triggered by the flags.

The student said he emailed the principal, Tim Carver. The principal told the student the issue would be taken care of.

The Iowa Standard reached out to both Carver and Smith, but has not received a response.

The student said he doesn’t believe it was appropriate for Smith to do what she did and say what she said.

The Iowa Standard looked at Smith’s Twitter page. Based on her page, she does seem to be a bit of a social justice warrior.

The following was part of an Aug. 31 tweet on “today’s book talks. #uhsreads” She also retweeted a quote that “we cannot solve racism, ableism, sexism, homophobia, classism, transphobia, settler colonialism by simply being kind. There needs to be a systemic redesign.”

Smith signed up for the “Equity Challenge.” She also sought help for her classroom library, specifically seeking out materials for an “anti-racism refresh.” 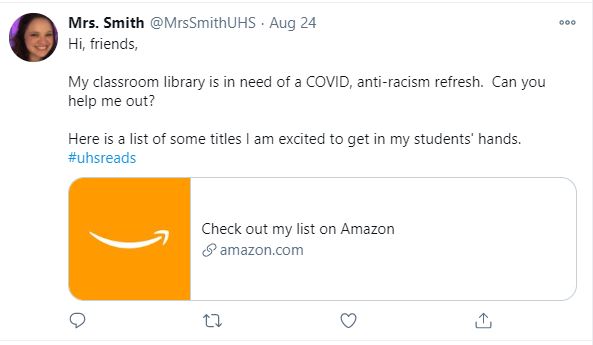 Here are some other posts: