Des Moines Register reporter Aaron Calvin has been the subject of much interest in Iowa since he unearthed a couple tweets sent by Carson King from eight years ago. We told you about that yesterday.

Today we are sharing more about Aaron Calvin and his own social media posts.

It starts with this photo that was shared to his timeline by a friend. 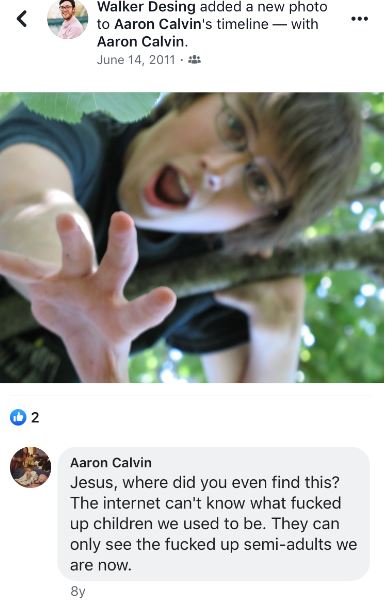 “Jesus, where did you even find this? The internet can’t know what fucked up children we used to be. They can only see the fucked up semi-adults we are now,” Calvin wrote in the comments.

On Aug. 11, 2011, a friend sent Calvin a link about Rebecca Black leaving school due to bullying.

Calvin responded, “good for those kids.” Then, there was a long writing about Christians who voted for Donald Trump.

“The people who he has allied himself with and who will populate his administration have proven records of enacting laws that are harmful to women and minorities,” Calvin wrote. “As far as I’m concerned, any self-identifying Christian who voted for Trump or didn’t consider it a moral duty to vote against him to ensure that someone so openly willing to oppress and enact violence in this way appears to me as completely morally bankrupt.

“It has now become apparent to me that the politics of this country are not safely progressive enough for me to attempt to be understanding of the qualms of white Christians. This election, to me, was not a question of governing ability or corruption, though those are important issues to me as well. The result of this election was nothing more than affirmation that, for a large part of this country and a large number of people who claim to adhere to beliefs of compassion, understanding, and acceptance that are laid out in the Bible, the supremacy of white men is, above all other things, more important.”

He also wrote, “In short: I have no compassion or understanding to spare for people who have so baldly affirmed that Christian values are merely secondary to their commitment to white supremacy.” 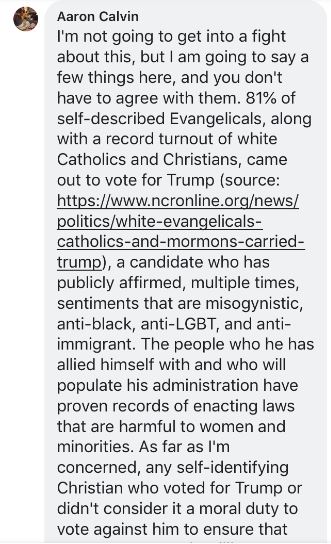