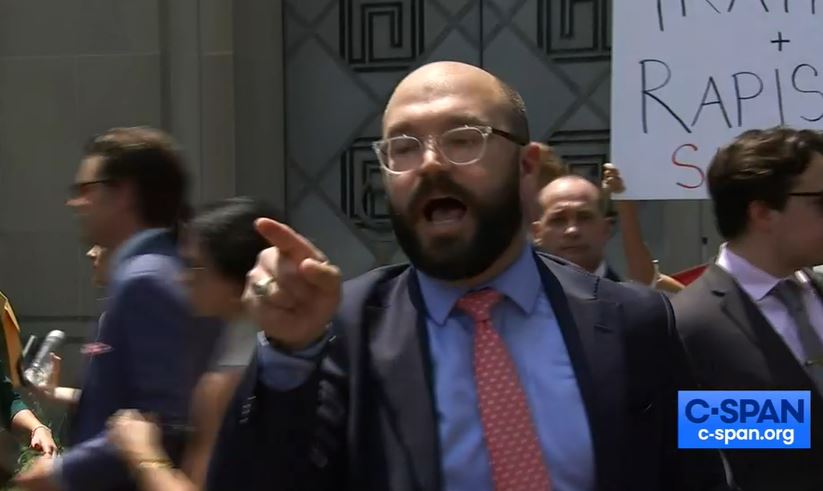 On Tuesday, a small group of GOP representatives hosted a press conference outside the Department of Justice to discuss the continued detention and treatment of political prisoners stemming from the Jan. 6 rally at the U.S. Capitol.

Taylor-Greene said the DOJ was given notice they’d be appearing to ask questions, but were not allowed into the lobby.

“Now, as members of Congress representing districts with hundreds of thousands of people, it’s unbelievable to me that the Department of Justice will not let us in their lobby to even answer our questions,” Taylor-Greene said.

What intelligence was available prior to Jan. 6 regarding the influx of people into the District of Columbia and their intentions?

“We already know that intelligence knew, they knew ahead of time that there were threats of violence,” Taylor-Greene said. “And I have to tell you as a freshman member of Congress, that was the fourth day on my job, and I was shocked, absolutely shocked at what happened at the Capitol. And even more so, I am shocked that with the intelligence that there was going to be violence, that the National Guard was not present on Jan. 6. On Jan. 5, we know that there were pipe bombs at the RNC and the DNC. There’s a video fo the person that placed them there, and I’d like to know and we’re asking the question, with that great threat of violence — pipe bombs at both places, RNC and DNC — why, why was it not taken seriously and why wasn’t the National Guard brought in?”

She said she and her colleagues would like to know how the detainees inside the jail are being treated.

Rep. Gohmert said they’ve received reports about mistreatment in the jail and people being shipped to jails all over.

“It is important to know the conditions in jail,” Gohmert said. “We’ve asked for an opportunity to inspect the jails. Back when I was a felony judge, I would show up unannounced at jails and prisons because I needed to know what kind of treatment people got that had to go in there.”

Gohmert said the group condemns any violence and he’d have no problem sending anybody who participated in violence, theft — any of the trespasses that knowingly did so — to jail.

Gohmert said they’ve asked for months for meetings with the attorney general.

“We have asked in letters to the DC jail and been refused,” he said. “The DC jail, prison, is under the auspices of the federal prison system. And yet we’ve been denied that. They want no oversight, they don’t want to give information and yet there are reports of people being held and demands for admission of guilt and they have not been shown the evidence against them. They’ve not been shown the exonerating, exculpatory evidence as required by law. So there are a lot of problems going on here.

“We still need to know, do we have political prisoners here in America or not? And we still don’t have an answer.”

Gohmert said he and his colleagues were there standing up for due process, something he’s fought for all along throughout his career, he added.

Gaetz said the group is wondering why questions have gone unanswered for “many months.”

Gosar said he wants answers to reports that the Jan. 6 detainees are being mistreated by the Biden Administration and Justice Department.

“These are not unruly or dangerous for violent criminals,” Gosar said. “These are political prisoners who are now being persecuted and bearing the pain of unjust suffering.”

Biggs noted some are being held without bail, some in solitary confinement for no “rational reason.”

“It leads us to wonder, are their rights being protected,” he said. “There are due process rights for everyone. Everyone.”

The questions, Biggs said, haven’t just been ignored by the DOJ, but other agencies have ignored questions about other issues.

Good said in America, there should be no question about the legal treatment of an American prior to the opportunity to answer the charges brought against them before a judge or jury.

“Due process must be afforded to all Americans, period,” he said.

Good quoted a defense attorney who noted the treatment of the Jan. 6 prisoners is not normal. The defendants are being isolated and made to eat off the floor, according to one defense attorney who was in prison for almost 20 years himself before being exonerated for a wrongful murder charge.

Protestors who disrupted the event the whole time became more aggressive about 16 minutes into the event.

Taylor-Greene said for those yelling and being an activist, they need to understand the Republicans will not back down or stop asking questions.

“We are looking for the truth,” she said. “And we believe the truth can be found by reaching out and answering and asking the right questions to the right people.”

The press conference ended at that point due to the aggressive demonstrators.