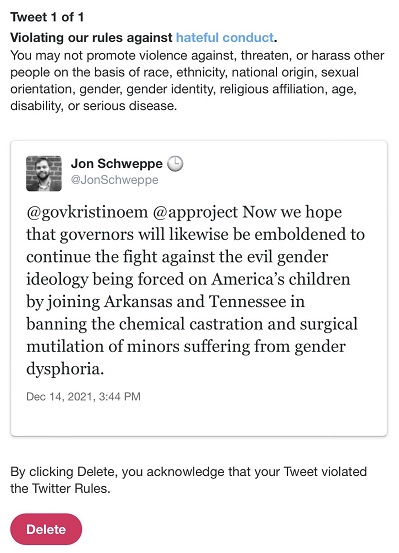 Schweppe’s appeal of the suspension was unsuccessful, and he was forced to delete the tweet in order to return to the platform.

“Our would-be dictators in Silicon Valley continue to illustrate that they live in a completely different reality than the rest of America. Throughout most of the country, there would be little controversy in saying that children should not be the subject of procedures that sterilize and mutilate their young bodies. In fact, advocating on behalf of those procedures would be considered hateful.

“But in the screwed-up world of Twitter’s woke censors, trying to protect young kids actually constitutes hateful, violent speech. Inside their impenetrable, left-wing bubble, they cannot imagine how any reasonable person would hold these views. Instead, the only acceptable position for them is that children with gender dysphoria should be pushed into a dangerous, irreversible program to ‘change’ their sex.

“It is terrifying that people with such views hold so much power over our national discourse. This cannot be allowed to continue. Republicans in Congress must commit to reining in the unaccountable influence of Big Tech should they regain the majority next year. Our future as a free society depends on it.”