The Second Amendment Preservation Act survived a subcommittee hearing on Wednesday, but everyone involved agreed the bill still needs work.

Subcommittee chair Sen. Jeff Reichman said the bill affirms Iowa’s authority to regulate firearms within the state’s borders and prohibits federal law that infringes on the right to keep and bear arms in Iowa for all law-abiding citizens.

Richard Rogers of Iowa Firearms Coalition said the group is registered undecided on the bill, thought they believe it’s an issue of “great importance.”

However, this bill is “largely copied” from the Missouri bill, Rogers said, which is caught up in legal challenges.

“We do think that this is a very important issue that the state make these statements — somewhat symbolic, but also something to fall back on if they’re pressed,” Rogers said. “No congressional act, no presidential order, no administrative rule from bureaucracy is law if it goes against the Constitution.”

Rogers said the reason for the legislation dates back to 2020 when Beto O’Rourke adamantly said the government would come for AR-15s. And then O’Rourke found a role with President Joe Biden and the House of Representatives passed “some pretty egregious legislation.”

“That’s the reason for concern,” he said. “It’s incumbent upon the state legislatures whose members have taken an oath to defend the Constitution of the United States, to push back against what seems to be being threatened. That’s why we think this is important and we’d like to see it move forward in some fashion.”

State Sen. Zach Nunn, who sponsored the bill, said the Second Amendment itself is a sanctuary.

“In crafting this bill, I took no pleasure in identifying there could become a time where we could have a federal regulatory authority that would force upon the states something that is protected to us already by the Constitution,” Nunn said. “But until that goes to a Supreme Court case and was struck down, the reality is we are living in a situation where several regulatory agencies have put it upon themselves to begin dictating a federal mandate that states, counties and cities are forced to impose.”

“These were not things written into law by Congress and signed by the President,” Nunn said. “They were dictated by department heads and bureaucrats forcing a regulatory authority upon state and local governments.

“It was made clear in DC vs. Heller in 2008, the Second Amendment right is immovable. And so when a department or agency knowingly forces a law enforcement or public safety officer to violate that law, Iowa should have the ability to stand up and say, ‘No, today,’ not, ‘no, once we get to a Supreme Court hearing potentially years from now.'”

Traci Kennedy, a chapter leader for Iowa Moms Demand Action for Gun Sense in America spoke against the bill, calling it a “dangerous bill.”

“It would make it illegal in Iowa for any public officer or employee of the state including state and local law enforcement officers to assist with the enforcement of federal gun laws that help make our state and community safe,” she said.

“This would likely prevent even the most basic law enforcement cooperation between state and federal entities,” she said.

Wendy Abrahamson of the Episcopal Diocese of Iowa also spoke against the bill.

“As Christians, we fundamentally believe that we are connected to one another and must support one another and care for one another,” she said. “And this bill, aside from the issue of firearm safety, which is on its own I’m grateful for what Traci Kennedy offered, it also to me is dangerous because it poses that law enforcement are potential enemies of us. I find this bill dangerous because it casts our neighbors as people that we should be suspicious of. People that we should arm ourselves against. And that the federal government is somehow our enemy. I see this bill as a very, very frightening piece of legislation that would actually put law enforcement in danger.”

Others who opposed the bill encouraged the legislature to allow the judiciary to continue deciding whether gun laws are constitutional. Another concern was creating a “chilling effect” for law enforcement.

Democrat State Sen. Tony Bisignano did not sign off in support of the bill.

“With all due respect for my colleague, Sen. Nunn, this unnecessary bill that I think has different motivations than to try to protect gun rights, I scoff at some of the things I read,” Bisignano said.

He took exception with the line from the bill mentioning to secure the nation’s existence and public happiness.

“Now, I don’t know how public happiness got in the language of this bill, but I wouldn’t use those words when it comes to the debate over gun rights or gun tragedies or mass murders,” he said.

Bisignano questioned what would happen if local law enforcement found a large amount of AR-15s in a person’s trunk along $250,000 in cash. Bisignano said he understand state law allows Iowa to confiscate that $250,000 cash on hand, but would they be able to confiscate the 150 AR-15s?

He criticized Republicans for going down a path allowing people to sue public school teachers and law enforcement.

“We want people to do their job,” he said. “And people make mistakes at their job. They should be trained, they should be instructed, they should be supervised until they’re capable. But I don’t think this stick over everyone’s head and beating them, jailing them, fining them is the direction that, at least the Democrats, do not want to go. We would rather educate and get along.”

Both Republican State Senators, Tom Shipley and Jeff Reichman, approved the bill while noting the need for improvements. 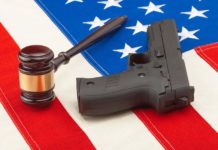 Most voters do not believe gun control is the answer