Congressman Steve King releases this statement following an announcement by the White House that President Donald J. Trump has signed HR 2157, the “Additional Supplemental Appropriations for Disaster Relief Act of 2019” into law.  HR 2157 provides important sources of federal funding to Iowa and other Midwestern states that have been impacted by severe flooding this year. King voted in favor of the disaster relief legislation, and he has previously spoken on the House floor about the importance of getting this legislation passed so that relief could be provided quickly to communities hit hard by flooding.

“I am pleased to announce that President Trump signed the disaster relief bill into law (Thursday),” said King. “The President’s signature means that federal help for Iowa’s flood recovery efforts is on the way. I have been working closely with local leaders in communities affected by the floods, and I am confident that they will welcome the opportunity to add federal resources to their efforts as they work towards full recovery.”

Altogether, the legislation provides $19.1 billion for disaster recovery efforts across the nation. Included in this total are $4.5 billion allocated to the United States Department of Agriculture for agricultural-related losses, emergency timber restoration, farmland repair, and watershed recovery work, and $3.3 billion for the Corps of Engineers to repair damages caused by natural disasters, and to invest in new flood and storm damage reduction projects.

On May 28, Congressman King held a special “Hornick Recognition Ceremony” to honor town leaders for their exemplary response to the flooding that led to the evacuation of their Woodbury County community. The ceremony can be viewed here.

King is a strong Congressional advocate of federal efforts to improve flood protection infrastructure along the Missouri River. On May 1, King testified before the House Committee on Transportation and Infrastructure about the need to revisit Pick-Sloan era baselines, as the runoff levels are being repeatedly exceeded. 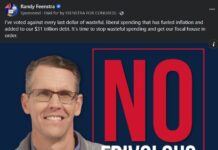