For far too long conservatives have been too quiet and apathetic. It has allowed the political Left to take a stranglehold not just on the culture, but on education, the media and pop culture.

Well, pretty much everything except the church and the traditional family — although they are trying to corrupt those institutions as well.

Chapman has led on this issue from the beginning. That is no surprise as he has long been one of the leading conservative voices in the Iowa Senate who is seemingly guided by speaking up for what’s right rather than what is political expedient (spoiler alert, what’s right is always politically expedient). Chapman has led on life, he’s led on free speech against Big Tech censorship, he’s led on efforts to make taxpayer-funded lobbying more transparent, he’s led on the Second Amendment — he has been everything a conservative could want.

So last week when Gobble said he thought Chapman went “too far” in his remarks, it wasn’t shocking. Now, I don’t dislike Gobble. I have had a couple of good conversations with him in the past. But disagreement is inevitable from time to time.

And here’s the deal — I’d rather have an “honest disagreement” than a politician who is a liar, a fake and a phony. The voters should know where a politician stands on critical issues. And politicians should want voters to know exactly where they stand because, after all, what good is getting elected if you get elected trying to be someone you’re not? Which then makes you choose between being someone you’re not as a representative or being someone you weren’t when running to be representative?

The Polk County Democrats called The Iowa Standard “Jake Chapman’s Enforcer.” We’re flattered, really, but that simply isn’t reality. It may be difficult for some to understand, but there are thousands of Iowa moms and dads who are backing Chapman in this battle. We simply get to write about it.

And rather than defend the sexually explicit, vulgar, inappropriate books, the Polk County Democrats resort to — you guessed it — name-calling.

Here’s the deal, if the Polk County Democrats believe so much in the appropriateness of these books being in school libraries, why don’t they post some of the content from them? Post the pictures in question. Post the passages in question. Let people make a truly educated decision. Put all the chips on the table and see just where the average Iowan falls on this issue.

As for The Iowa Standard, I had someone tell me this week at the Capitol that the reputation we have among “Republican leadership” in Iowa is we will “go after anybody.”

We are thankful that is the reputation we have. Because it is 100 percent true. When it comes to public statements, public actions and public votes of people in power, we will hold them accountable — whether they are Republican or Democrat.

The question is, what is the standard for deciding when someone deserves criticism or deserves praise? Here at The Iowa Standard, that standard is not one’s party affiliation.

So, when Gobble publicly chastised Chapman, we criticized him. When Gobble met with concerned parents earlier this week to discuss the books, we praised him.

It is that simple.

Why are so many Republicans mushy moderates? Because the Left has successfully bullied so many conservatives into silence. That isn’t going to happen here.

The days of hush-hush conservatism in Iowa are over. No more pale pastels. It is time to champion the “controversial” issues. Embrace the so-called “radicalism.”

In doing so, we’ll learn that those issues aren’t so radical or controversial after all.

Democrats continually play to their base. And they should. That’s how politics works. It’s time Republicans represent and reflect their base. 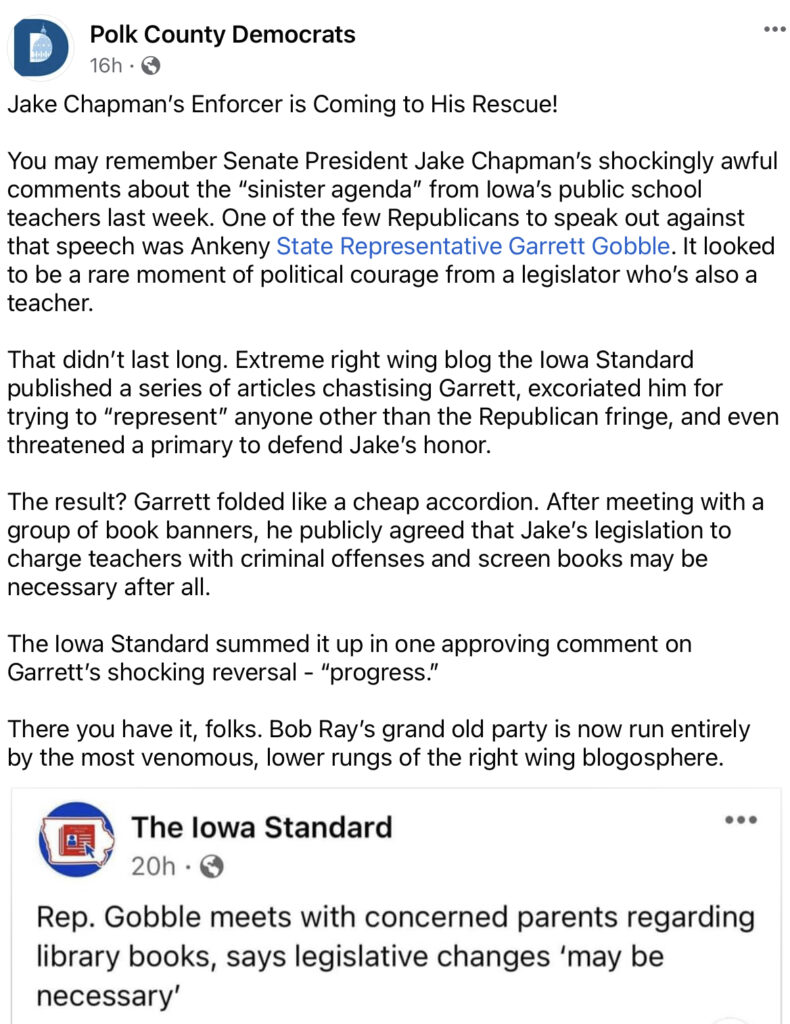